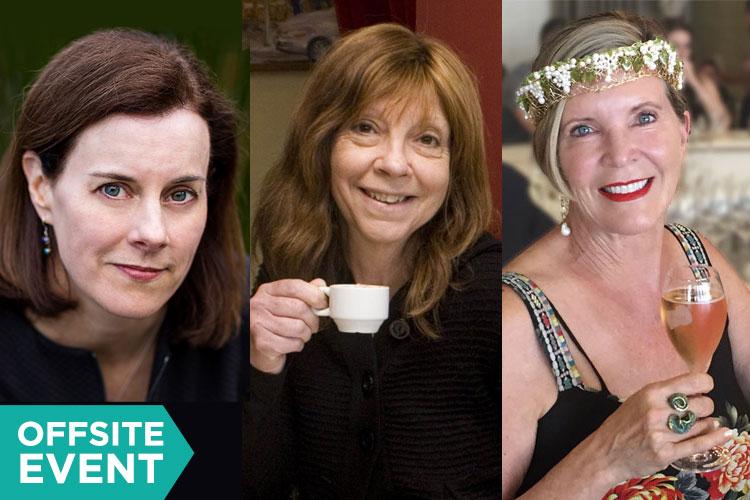 Join us for a tasty pour and a discussion on the evening's topic - Women Who Surmount Their Obstacles and How They Do It.

Get a free pour with purchase of one of their books - The Physician's Daughter, Murder at the Porte de Versailles, Champagne Widows

This event will include a QA session and signing and is free and open to the public.

From the author of The Underground River comes this compelling new novel of female perseverance.

Set in the aftermath of the Civil War, The Physician's Daughter is the story of two people trying to make their way in a world that is struggling to escape its past.

It is 1865, the American Civil War has just ended, and 18-year old Vita Tenney is determined to pursue her lifelong dream of becoming a country doctor like her father. But when her father tells her she must get married instead, Vita explores every means of escape - and finds one in the person of war veteran Jacob Culhane.

Damaged by what he's seen in battle and with all his family gone, Jacob is seeking investors for a fledgling business. Then he meets Vita - and together they hatch a plan that should satisfy both their desires. Months later, Vita seemingly has everything she ever wanted. But alone in a big city and haunted by the mistakes of her past, she wonders if the life she always thought she wanted was too good to be true. When love starts to compete with ambition, what will come out on top?

*This book is available for purchase online and at the event

Aurthor: Martha Conway has been nominated for an Edgar Award and won the North American Book Award for Best Historical Fiction. Martha teaches creative writing for Stanford University's Continuing Studies Program and UC Berkeley Extension. Born in Cleveland, Ohio, she is one of seven sisters. She now lives in San Francisco with her family.

Murder at the Porte de Versailles (An Aimée Leduc Investigation #20) -

November 2001: in the wake of 9/11, Paris is living in a state of fear. For Aimée Leduc, November is bittersweet: the anniversary of her father’s death and her daughter’s third birthday fall on the same day. A gathering for family and friends is disrupted when a bomb goes off at the police laboratory—and Boris Viard, the partner of Aimée’s friend Michou, is found unconscious at the scene of the crime with traces of explosives under his fingernails.

Aimée doesn’t believe Boris set the bomb. In an effort to prove this, she battles the police and his own lab colleagues, collecting conflicting eyewitness reports. When a member of the French secret service drafts Aimée to help investigate possible links to an Iranian Revolutionary guard and fugitive radicals who bombed Interpol in the 1980s, Aimée uncovers ties to a cold case of her father’s.

As Aimée scours the streets of the 15th arrondissement trying to learn the truth, she has to ask herself if she should succumb to pressure from Chloe’s biological father and move them out to his farm in Brittany. But could Aimée Leduc ever leave Paris?

Author: Cara Black is the author of twenty books in the New York Times bestselling Aimée Leduc series as well as the thriller Three Hours in Paris. She has received multiple nominations for the Anthony and Macavity Awards, and her books have been translated into German, Norwegian, Japanese, French, Spanish, Italian, and Hebrew. She lives in San Francisco with her husband and son and visits Paris frequently.

Champagne, France, 1800. Twenty-year-old Barbe-Nicole inherited Le Nez (an uncanny sense of smell) from her great-grandfather, a renowned champagne maker. Determined to use Le Nez to make great champagne, she learns her childhood sweetheart, Fran ois Clicquot, wants to start a winery and marries him despite his mental illness.

Her husband's tragic death forces her to become Veuve (Widow) Clicquot and grapple with a domineering partner, the complexities of making champagne, and six Napoleon wars, which cripple her ability to sell champagne. When she falls in love with her sales manager, Louis Bohne, who asks her to marry, she must choose between losing her winery to her husband, as dictated by Napoleon Code, or losing Louis. In the ultimate showdown, Veuve Clicquot risks imprisonment and even death, defying Napoleon himself.

Author: Rebecca is a champagne geek, lavender farmer and triple-gold award-winning author. She is champagne historian, tour guide, and champagne cocktail expert for Breathless Wines. Rebecca Rosenberg first fell in love with methode champenoise in Sonoma Valley, California. Over decades of delicious research, she has explored the wine caves and cellars of France, Spain, Italy, and California in search of the essence of fine champagne. Rebecca holds a Stanford University novel writing certificate. Other award winning novels include The Secret Life of Mrs. London and Gold Digger, the Remarkable Baby Doe Tabor.