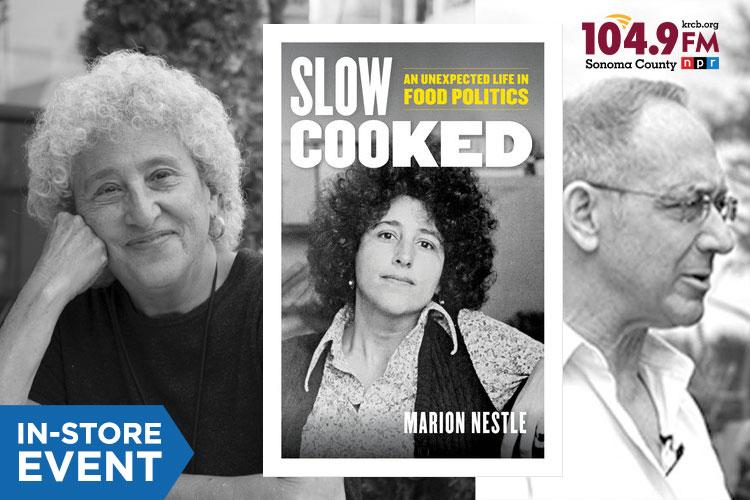 This event is in partnership with Northern California Public Media KRCB 104.9

The discussion will be followed by a Q&A and book signing.

This event is free and open to the public.

Marion Nestle reflects on her late-in-life career as a world-renowned food politics expert, public health advocate, and a founder of the field of food studies after facing decades of low expectations.

In this engrossing memoir, Marion Nestle reflects on how she achieved late-in-life success as a leading advocate for healthier and more sustainable diets. Slow Cooked recounts of how she built an unparalleled career at a time when few women worked in the sciences, and how she came to recognize and reveal the enormous influence of the food industry on our dietary choices.

By the time Nestle obtained her doctorate in molecular biology, she had been married since the age of nineteen, dropped out of college, worked as a lab technician, divorced, and become a stay-at-home mom with two children. That's when she got started. Slow Cooked charts her astonishing rise from bench scientist to the pinnacles of academia, as she overcame the barriers and biases facing women of her generation and found her life's purpose after age fifty. Slow Cooked tells her personal story—one that is deeply relevant to everyone who eats, and anyone who thinks it's too late to follow a passion.

Author: Marion Nestle is Paulette Goddard Professor of Nutrition, Food Studies, and Public Health, Emerita, at New York University, in the department she chaired from 1988-2003 and from which she retired in September 2017. She is also Visiting Professor of Nutritional Sciences at Cornell. She holds honorary degrees from Transylvania University in Kentucky and the Macaulay Honors College of the City University of New York. She earned a Ph.D. in molecular biology and an M.P.H. in public health nutrition from the University of California, Berkeley.

She is the author, co-author, or co-editor of fourteen books, several of them prize-winning, most notably Food Politics: How the Food Industry Influences Nutrition and Health. From 2008 to 2013, she wrote a monthly Food Matters column for the San Francisco Chronicle food section. She blogs daily (almost) at www.foodpolitics.com.

She has received many awards and honors. She received the John Dewey Award for Distinguished Public Service from Bard College in 2010. In 2011, the University of California School of Public Health at Berkeley named her as Public Health Hero. Also in 2011, Michael Pollan ranked her as the #2 most powerful foodie in America (after Michelle Obama), and Mark Bittman ranked her #1 in his list of foodies to be thankful for. She received the James Beard Leadership Award in 2013, and in 2014 the U.S. Healthful Food Council's Innovator of the Year Award and the Public Health Association of New York City's Media Award, among others. In 2016, Soda Politics won literary awards from the James Beard Foundation and the International Association of Culinary Professionals. In 2018, she was named one of the UC Berkeley School of Public Health's 75 most distinguished graduates in 75 years, won a Trailblazer Award from the International Association of Culinary Professionals, and was selected Grande Dame of the year by Les Dames d'Escoffier International. In 2019, the Hunter College Food Policy Center gave her its first Changemaker Award and Heritage Radio named her to its Tenth Anniversary Hall of Fame.

Clark Wolf is a James Beard Award winning food and restaurant consultant, author, editor and columnist. He is host of At The Table with Clark Wolf on KSRO and the new Savoring Sonoma, on KRCB, Sonoma County’s NPR station. He lives in a 100 year old cabin in the redwoods.