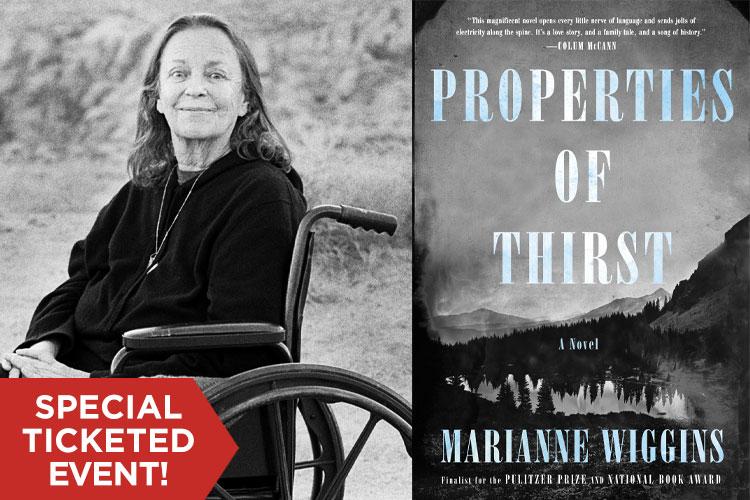 *UPDATE 7/27: THIS EVENT HAS BEEN MOVED ONLINE AND WILL BE VIRTUAL

Sponsored by SCCC and moderated by Sheryl Cotleur, this event is off-site at the Sebastopol Community Cultural Center on Thursday, August 4 at 7:00pm.

Ticket includes a signed copy of Properties of Thirst.

Masks not required but recommended. Please see below for more information regarding COVID protocols.

Fifteen years after the publication of Evidence of Things Unseen, National Book Award and Pulitzer Prize finalist Marianne Wiggins returns with a novel destined to be an American classic: a sweeping masterwork set during World War II about the meaning of family and the limitations of the American Dream.

Rockwell “Rocky” Rhodes has spent years fiercely protecting his California ranch from the LA Water Corporation. It is here where he and his beloved wife Lou raised their twins, Sunny and Stryker, and it is here where Rocky has mourned Lou in the years since her death.

As Sunny and Stryker reach the cusp of adulthood, the country teeters on the brink of war. Stryker decides to join the fight, deploying to Pearl Harbor not long before the bombs strike. Soon, Rocky and his family find themselves facing yet another incomprehensible tragedy.

Rocky is determined to protect his remaining family and the land where they’ve loved and lost so much. But when the government decides to build a Japanese-American internment camp next to the ranch, Rocky realizes that the land faces even bigger threats than the LA watermen he’s battled for years. Complicating matters is the fact that the idealistic Department of the Interior man assigned to build the camp, who only begins to understand the horror of his task after it may be too late, becomes infatuated with Sunny and entangled with the Rhodes family.

Properties of Thirst is a novel that is both universal and intimate. It is the story of a changing American landscape and an examination of one of the darkest periods in this country’s past, told through the stories of the individual loves and losses that weave together to form the fabric of our shared history. Ultimately, it is an unflinching distillation of our nation’s essence—and a celebration of the bonds of love and family that persist against all odds.

Marianne Wiggins is the author of eight books of fiction including John Dollar and Evidence of Things Unseen and two short story collections. For her novel Evidence of Things Unseen she was a finalist for the Pulitzer Prize for Fiction and the National Book Award. She has won a Whiting Award, a National Endowment for the Arts fellowship, the Heidinger Kafka Prize, and was shortlisted for the Women's Prize for Fiction. She lives in Los Angeles.

Sheryl Cotleur - It’s hard to imagine a Book Buyer who has read more or done more for launching authors than Sheryl Cotleur. With 38 years in the book business, she has what many readers would  consider a dream job. She buys books for all nine of Copperfield's Books' stores in San Francisco's North Bay, and along with the job, she reads incessantly, while working with publishers, authors, and editors to discover the best new books. Over the past eight years, her role has expanded beyond the bookstore to include serving as a jurist for a number of book awards and, in 2014, she was named as a judge for the National Book Foundation’s annual fiction awards, one of the nation’s most prestigious literary prizes. She was also a jurist for the 2016 Carnegie Medal for Excellence in Fiction and Nonfiction and the 2018 Kirkus Prize.