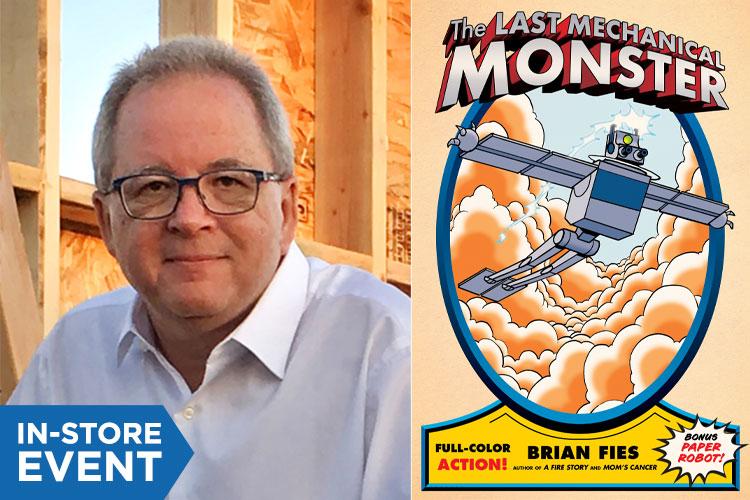 The discussion will be followed by a Q&A and book signing.

This event is free and open to the public for all ages. Masks required.

From Brian Fies, the acclaimed graphic novelist of Mom’s Cancer, Whatever Happened to the World of Tomorrow?, and A Fire Story, comes a classic comic book adventure for all ages

Decades after being imprisoned for threatening his city with an army of giant robots, an elderly scientist reenters society, only to discover he needs help navigating life in the 21st century. Experiencing real kindness and friendship for the first time, his new relationships challenge the inventor’s single-minded devotion for vengeance—just as his plans threaten to spiral out of his control. The Last Mechanical Monster by Brain Fies is a story about ambition, creativity, mortality, friendship, and legacy. But it is also a story about how we want to be remembered, and what we leave behind.

This latest graphic novel from Brian Fies (Mom’s Cancer, Whatever Happened to the World of Tomorrow?, and A Fire Story) already has a fan base and a considerable history of accomplishment. Initially published online as a webcomic, it was nominated for an Eisner Award for Best Digital Comic in both 2014 and 2015. It is also a pivot from Fies’s more serious graphic novels, created at a time when he was between large, demanding projects, and needing to remind himself that comics could and should be fun and provide a joyful escape—something we can all use a little more of these days.

Author: Brian Fies is a writer and cartoonist. His widely acclaimed first graphic novel, Mom’s Cancer, won the Eisner Award for Best Digital Comic in 2005 (the first webcomic to win this award and the inspiration for the category), the 2007 Lulu Blooker Prize for Best Comic, the 2007 Harvey Award for Best New Talent, and the 2007 German Children's Literature Award. He is also the author of the acclaimed, award-winning graphic novels A Fire Story, which received four starred reviews and a regional Emmy Award for an animated adaptation, and Whatever Happened to the World of Tomorrow?, winner of the American Astronautical Society’s 2009 Eugene M. Emme Award for Best Young Adult Literature. He lives in Santa Rosa, California.