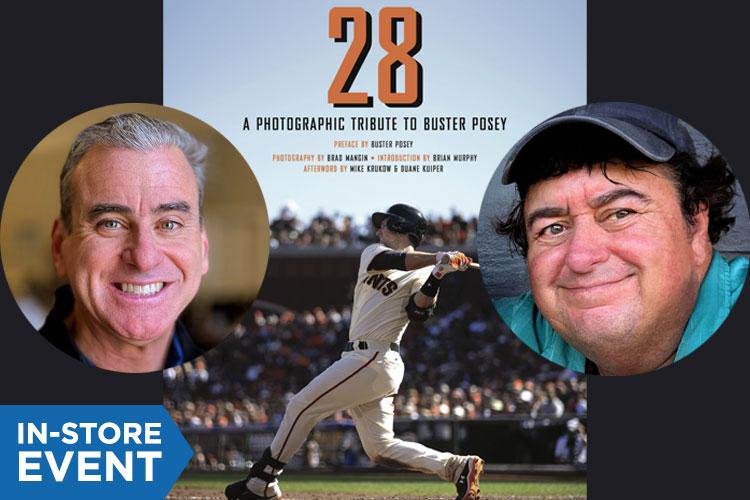 Longtime sports photographer Brad Mangin teams up with Buster Posey himself in this visual celebration of the star catcher’s twelve seasons with the San Francisco Giants. Packed with over 150 photographs, 28: A Photographic Tribute to Buster Posey captures Buster’s entire career, from the first time he stepped foot onto the field for the Giants back in 2009 all the way to his final at-bat in 2021. One of the most beloved players in Giants history, the rookie catcher helped carry the franchise to its first World Series championship in San Francisco in 2010, and from there, the rising star carried the Giants to win two more World Series in 2012 and 2014—all brilliantly documented by Mangin.

With an introduction from veteran sportswriter and San Francisco radio host Brian Murphy, along with essays from Buster and his teammates, managers, and other sports luminaries—including Mike Krukow & Duane Kuiper, Bruce Bochy, Matt Cain, Brandon Crawford, Gabe Kapler, Hunter Pence, Sergio Romo, Logan Webb, and Barry Zito—28 tells the story of Buster’s illustrious career from the heartfelt perspective of those who know him best.

Off the field, Buster used his platform to help children, and now his legacy continues to transform lives. He and his wife, Kristen, created and nurtured BP28, a charity that has raised over $4 million since 2016 in its endeavor to improve outcomes and raise awareness of pediatric cancer. Kristen also shares that story here, and a portion of the proceeds from this book will benefit their foundation.

Authors: Brad Mangin is a freelance sports photographer based in the San Francisco Bay Area. He shot his first San Francisco Giants game in 1987 for the Contra Costa Times. Mangin worked for legendary sports photographer Neil Leifer as a staffer at The National Sports Daily, shot ten Sports Illustrated covers, and photographed twenty World Series. He donated his archive of over 125,000 baseball photographs to the National Baseball Hall of Fame and Museum in Cooperstown, New York. Previously, Mangin and Brian Murphy coauthored Worth the Wait (2010); Never. Say. Die. (2012); and Championship Blood (2014). Mangin also published Instant Baseball: The Baseball Instagrams of Brad Mangin in 2013. He lives in Pleasanton, California, with his cat, Willie.

Brian Murphy is the cohost of the popular Murph & Mac morning show on KNBR 104.5/680, the flagship of the San Francisco Giants. Prior to joining KNBR in 2004, Murphy was a sportswriter for fifteen years for the San Francisco Chronicle, San Francisco Examiner, Santa Rosa Press Democrat, and Los Angeles Times. He coauthored Worth the Wait; Never. Say. Die.; and Championship Blood with Brad Mangin. Murphy has also written The San Francisco Giants: 50 Years; San Francisco 49ers: From Kezar to Levi’s Stadium; and coauthored The Last Putt: Two Teams, One Dream, and a Freshman Named Tiger. The UCLA graduate lives in Mill Valley with his wife, Candace, and two sons, Declan and Rory.