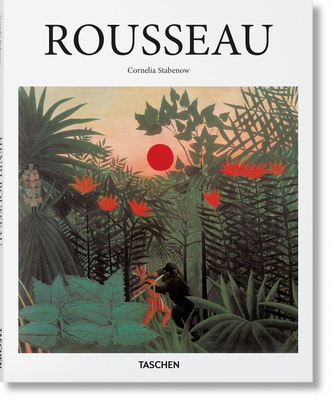 Henri Rousseau (1844-1910) was a clerk in the Paris customs service who dreamed of becoming a famous artist. At the age 49, he decided to give it a try. At first, Rousseau's bright, bold paintings of jungles and exotic flora and fauna were dismissed as childish and simplistic, but his unique and tenacious style soon won acclaim. After 1886, he exhibited regularly at Paris's prestigious Salon des Ind pendants, and in 1908 he received a legendary banquet of honor, hosted by Picasso.

Although best known for his tropical scenes, Rousseau, in fact, never left France, relying on books and magazines for inspiration, as well as trips to natural history museums and anecdotes from returning military acquaintances. Working in oil on canvas, he tended toward a vibrant palette, vivid rendering, as well as a certain lush, languid sensuality as seen in the nude in the jungle composition The Dream.

Today, "Rousseau's myth is well established in art history, garnering comparison with such other post-Impressionist masters as C zanne, Matisse, and Gauguin. In this dependable TASCHEN introduction, we explore the makings of this late-blooming artist and his legacy as an unlikely hero of modernism.

Born back in 1985, the Basic Art Series has evolved into the best-selling art book collection ever published. Each book in TASCHEN's Basic Art series features:

a detailed chronological summary of the life and oeuvre of the artist, covering his or her cultural and historical importance

This feature require that you enable JavaScript in your browser.
END_OF_DOCUMENT_TOKEN_TO_BE_REPLACED

This feature require that you enable JavaScript in your browser.
END_OF_DOCUMENT_TOKEN_TO_BE_REPLACED