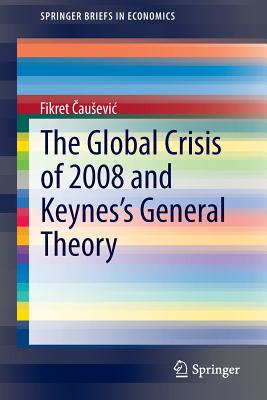 This book describes the international context and some of the factors that have weakened the influence of Keynesian economic thought. It illustrates economic responses offered by the new Keynesian school and the alternative perspective on the global crisis presented by the monetary circuit theory, with a special emphasis on Minsky's financial instability hypothesis. The authors present a commentary on Keynes's General Theory with an emphasis on his theory of the scarcity of capital, his analysis of the change in the structure of costs, and straightforward recommendation for a policy marked by very low interest, which he felt was needed to maintain full employment. Additionally, the book discusses major changes in the cost structure of globally active companies, resulting from the extremely intense international capital flows over the last three decades. The authors point out the need to redefine the open economy macroeconomics model, switching it from a world consisting of two major developed open economies to one consisting of two major open economies, one of which is developed and the other is developing.

Fikret Čausevic was born in Bihac, Bosnia and Herzegovina, in 1963. He is Professor of Economics and International Finance at the School of Economics and Business, University of Sarajevo. In 2002, 2006, 2007 and 2010 he was a Visiting Fellow under the South East Europe Faculty Development Programme at the London School of Economics and Political Science. In the 2011/2012 academic year Fikret was the SEESOX Alpha Bank Visiting Fellow at St Antony's College, University of Oxford. Over the last decade he has written extensively about economic transition in the World, South-East Europe, the Western Balkans, and Bosnia and Herzegovina. Some of his monographs and books published in English were: Financial Liberalization and Globalization - Impact and Effects in South-East European Countries, Money Market Development in Bosnia and Herzegovina, and Foreign Trade Policy and Trade Balance of Bosnia and Herzegovina. His book Economic Sovereignty and Global Capital Flows was published by the International Forum Bosnia (2006), and Hyderabad University Press, India (2008). Fikret's article "What type of fiscal policy for the Western Balkans during the crisis" was published by the Southeast European and Black Sea Studies (2012), and his textbook (in Bosnian language) The Principles of Economics (Volume I - Principles of Microeconomics; Volume II - Principles of Macroeconomics) was published by the School of Economics and Business, University of Sarajevo in July 2012. In 2013, the International Forum Bosnia published Fikret's collection of papers Bosnian Economic Puzzle - Economic Transition in Bosnia and Herzegovina from 1996 to 2013.

This feature require that you enable JavaScript in your browser.
END_OF_DOCUMENT_TOKEN_TO_BE_REPLACED

This feature require that you enable JavaScript in your browser.
END_OF_DOCUMENT_TOKEN_TO_BE_REPLACED