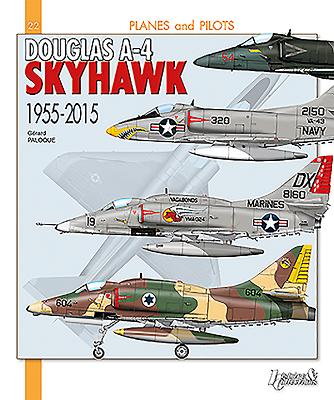 This is book number 22 in the Planes and Pilots series.

Originally designed to replace another aircraft from the same manufacturer Douglas, the famous Skyraider, the A-4 Skyhawk enjoyed a remarkable career for nearly half a century. It was first the U.S. Navy and the U.S. Marine Corps who utilized this aircraft extensively, with the many squadrons labeled " Scooter " it's quasi-official nickname. The two branches implemented them especially during the Vietnam War before transforming them into "aggressors" within the core of the training units. In total, nearly 3000 Skyhawks were constructed until 1979, when manufacturing was terminated, while the success of the delta wing and the smaller dimensions went beyond the borders of the United States, with only seven other nations employing it in the world. Among these is Israel, whose A-4 made its debut during the Yom Kippur War in 1973 and which was only retired from service in 2008. More recently the A-4 was used in Argentina, where the Skyhawk won several successes against the British forces during the Falklands War in 1982.

This feature require that you enable JavaScript in your browser.
END_OF_DOCUMENT_TOKEN_TO_BE_REPLACED

This feature require that you enable JavaScript in your browser.
END_OF_DOCUMENT_TOKEN_TO_BE_REPLACED