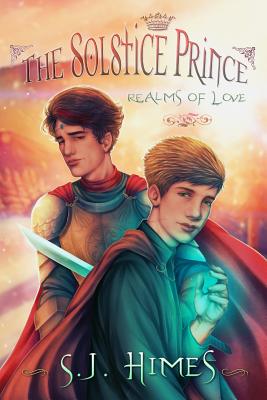 Rescued from slavers, healer novice Jaime Buchanan finds himself alone and free in Pyrderi, a kingdom of magic, mythical creatures, and a culture as open and kind as his homeland was cruel and close-minded. Despite his rescue, Jaime is not left without scars, both mental and physical. Traumatized by his experience and hiding his gift, Jaime struggles to earn his place in the kitchens of Angharad Palace, the heart of Taliesin City. His former life as a student of the healing arts leaves him at a disadvantage in the kitchens, and his damaged state is becoming more apparent by the day. One day, when necessity and fate intervene, Jaime meets someone unexpected-Prince Maxim, youngest son of the Pyrderian king, a sword master and a devastatingly kind man. Unaccustomed to powerful people with compassion and heart, Jaime flees. A cascade of events reveals Jaime's hidden talents of healing, and he finds himself not in chains, but at the beginning of a new life. This swift change of fortune opens Jaime up to new possibilities, including a smitten prince who cautiously courts Jaime, easing him away from his fears and reminding him that compassion and love can make him strong. The winter solstice is quickly approaching, and Prince Maxim shows Jaime the enjoyment and excitement to be found in a land that embraces the ice and cold, and the mysteries of all things magical. He learns to see the man under the royal mantle, and Maxim is more than even Jaime suspected. The winter solstice is nigh when tragedy strikes, and Jaime learns that his past of grief and sorrow can be a pillar of strength for his solstice prince. If there is one thing that Jaime believes above all else, it is in the healing power of love.

SJ Himes I'm a self-employed writer who stresses out about the silliest things, like whether or not I got my dog the best kind of snack and the fact my kindle battery tends to die when I'm at the best part in a book. I write mainly gay romance, erotica, and urban fantasy, with occasional forays into contemporary and paranormal. I love a book heavy on plot and character evolution, and throw in some magic, and that's perfection. My current series are: The Beacon Hill Sorcerer, Bred For Love (as Revella Hawthorne), The Wolfkin Saga, and the epic fantasy romance series Realms of Love. My last two novels in the Beacon Hill Sorcerer won 3rd Place in the Gay Fantasy category for the 2016 Rainbow Awards. I live in New Orleans, where the personalities are big and loud and so are the bugs! New Orleans is rich in cultural history, and the flavor and music of the City is impossible to hide. Before that, I lived all over the United States: Tampa, Western Massachusetts, Indianapolis, and on and on.... I'm a nomad, and I've yet to find a place that calls to me strongly enough to become home. My faithful travel companions are my dog Micah, the numerous voices in my head who insist they all get put on paper, and the wind at my back. Website: https: //www.sjhimes.com/en

This feature require that you enable JavaScript in your browser.
END_OF_DOCUMENT_TOKEN_TO_BE_REPLACED

This feature require that you enable JavaScript in your browser.
END_OF_DOCUMENT_TOKEN_TO_BE_REPLACED