No Self, No Problem: How Neuropsychology Is Catching Up to Buddhism (Paperback) 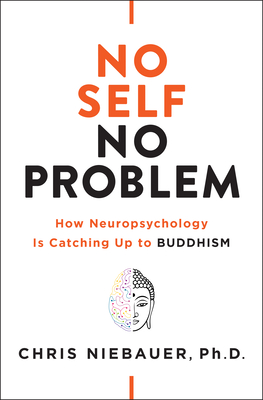 While in grad school in the early 1990s, Chris Niebauer began to notice striking parallels between the latest discoveries in psychology, neuroscience, and the teachings of Buddhism, Taoism, and other schools of Eastern thought. When he presented his findings to a professor, his ideas were quickly dismissed as “pure coincidence, nothing more.”

Fast-forward 20 years later and Niebauer is a PhD and a tenured professor, and the Buddhist-neuroscience connection he found as a student is practically its own genre in the bookstore. But according to Niebauer, we are just beginning to understand the link between Eastern philosophy and the latest findings in psychology and neuroscience and what these assimilated ideas mean for the human experience.

In this groundbreaking book, Niebauer writes that the latest research in neuropsychology is now confirming a fundamental tenet of Buddhism, what is called Anatta, or the doctrine of “no self.” Niebauer writes that our sense of self, or what we commonly refer to as the ego, is an illusion created entirely by the left side of the brain. Niebauer is quick to point out that this doesn't mean that the self doesn't exist but rather that it does so in the same way that a mirage in the middle of the desert exists, as a thought rather than a thing. His conclusions have significant ramifications for much of modern psychological modalities, which he says are spending much of their time trying to fix something that isn’t there.

What makes this book unique is that Niebauer offers a series of exercises to allow the reader to experience this truth for him- or herself, as well as additional tools and practices to use after reading the book, all of which are designed to change the way we experience the world—a way that is based on being rather than thinking.

Chris Niebauer earned his Ph.D. in cognitive neuropsychology at the University of Toledo, specializing in the differences between the left and right sides of the human brain. He is currently a professor at Slippery Rock University in Pennsylvania, where he teaches courses on consciousness, mindfulness, left- and right-brain differences, and artificial intelligence.Visit him and learn more on his website: www.chrisniebauerphd.com

This feature require that you enable JavaScript in your browser.
END_OF_DOCUMENT_TOKEN_TO_BE_REPLACED

This feature require that you enable JavaScript in your browser.
END_OF_DOCUMENT_TOKEN_TO_BE_REPLACED