The Paradox of Stillness: Art, Object, and Performance (Hardcover) 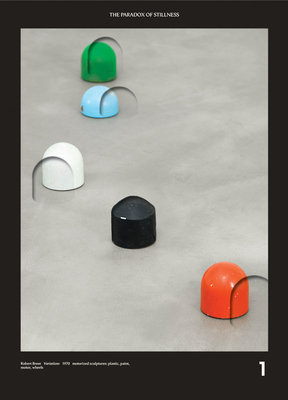 How performance has transformed the status of the art object, in works by F lix Gonz lez-Torres, Oskar Schlemmer, Robert Morris and more

Presenting works from the early 20th century to today, The Paradox of Stillness: Art, Object, and Performance examines the notion of stillness as both a performative and visual gesture, featuring practitioners who have constructed static or near-static experiments that hover somewhere between action and representation as they are experienced in the gallery space. The exhibition investigates performance from the perspective of the object rather than the body, examining how performance has reinterpreted traditional artistic mediums.

Stillness and permanence are qualities typically seen as inherent to painting and sculpture--consider the frozen gestures of a historical tableau or the unyielding solidity of a bronze figure. The Paradox of Stillness, however, expands the artwork's quality of stillness to accommodate uncertain temporalities and physical states, investigating works that merge objects with human bodies suspended in motion. Featuring artists whose works include performative elements but also embrace acts, objects and gestures that refer more to the inert qualities of painting or sculpture than to true staged action, The Paradox of Stillness rethinks the history of performance through its aesthetic investigations into the interplay of the fixed image and the live body. Artists include: Marina Abramovic, Merce Cunningham, Giorgio de Chirico, VALIE EXPORT, Gilbert and George, F lix Gonz lez-Torres, Maria Hassabi, Jannis Kounellis, Kasimir Malevich, Piero Manzoni, Robert Morris, Senga Nengudi, Michelangelo Pistoletto, Oskar Schlemmer, Sophie Taeuber-Arp, Cindy Sherman, Mario Garcia Torres and Franz West.

This feature require that you enable JavaScript in your browser.
END_OF_DOCUMENT_TOKEN_TO_BE_REPLACED

This feature require that you enable JavaScript in your browser.
END_OF_DOCUMENT_TOKEN_TO_BE_REPLACED