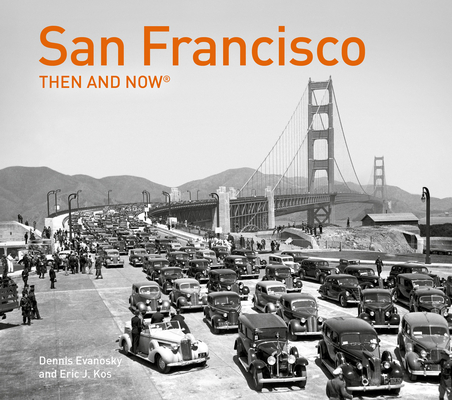 San Francisco Then and Now pairs photographs from the nineteenth and twentieth centuries with specially commissioned views of the same scenes as they look today.San Francisco is home to some of America’s most diverse architecture and design, including the iconic Golden Gate Bridge, the bustling Fisherman’s Wharf, the original Chinatown, the Sentinel Building, the Transamerica Pyramid, but most of all of the Victorian, clapboard buildings exemplified by the five "Painted Ladies."The book allows you to visit Coit Tower and Lombard Street—the "crookedest street in the world"—on Telegraph Hill, hop on one of the famous streetcars and travel through eclectic neighborhoods where Victorian sophistication is juxtaposed with modern elements. Stop by the Mission District, which was once home to the Ohlone Indians and Spanish missionaries, and is now full of artists and hipsters.San Francisco has seen the dawn of many countercultural movements. In the 1950s and 1960s, it was home to Beat poets and writers such as Allen Ginsberg and Jack Kerouac, as well as Lawrence Ferlinghetti, founder of the landmark City Lights Bookstore. San Francisco has also seen the birth of social trends that influenced the nation: antiwar protests, the sexual revolution, and the fight for women’s rights. Beat, counterculture, and gay and lesbian movements have thrived in such storied neighborhoods as North Beach, Haight-Ashbury, and the Castro. Sites include: Golden Gate Bridge, Palace of Fine Arts, Alcatraz, Fisherman's Wharf, Lombard Street, Coit Tower, Chinatown, Nob Hill, Ferry Building, Bay Bridge, Lotta's Fountain, Union Square, Candlestick Point, Alamo Square, Castro District, Twin Peaks, Haight-Ashbury, Cliff House, Ocean Beach.

Dennis Evanosky and Eric J. Kos publish the Alameda Sun, a weekly newspaper across the bay from San Francisco. Dennis has written three books about Bay Area history. Eric graduated from the Rhode Island School of Design in 1977. He has written for and designed various publications before forming Stellar Media Group Inc. in 2001. Dennis and Eric first teamed up in 2004 to write East Bay Then and Now and in 2010 Los Angeles from the Air Then and Now. They are also the authors of Lost San Francisco.

This feature require that you enable JavaScript in your browser.
END_OF_DOCUMENT_TOKEN_TO_BE_REPLACED

This feature require that you enable JavaScript in your browser.
END_OF_DOCUMENT_TOKEN_TO_BE_REPLACED