Medals and Ribbons of the U. S. Navy: An Illustrated History and Guide (Hardcover) 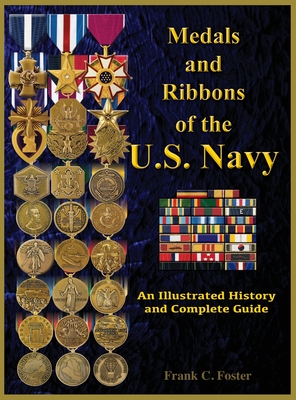 Medals and Ribbons of U.S. Navy is the first complete illustrated history of the medals and ribbons of the Navy from the Revolution up to today. Every type and variation of Navy military medals and ribbons along with their appropriate devices is shown and described in color. The photography and illustrations are exceptional. There are also chapters on how to determine a veteran's military medals and ribbons. Perhaps most unique is a series of U.S. Navy veterans' military awards displays covering World War II, Korea, Vietnam, the Liberation of Kuwait, Afghanistan, Iraq, and the Global War on Terror. The detail sections show how veterans, retirees and families can claim their medals. A comprehensive guide lays out how to wear medals and insignia for active duty, National Guard and reserve service members as well as the correct protocol for the wear of medals and insignias on the uniform by veterans and retirees. The correct order of wear for all U.S. Navy medals and ribbons is laid out in precise and beautiful detail to include additional information on how multiservice ribbons are worn by veterans. Perhaps one of the nicest additions to this book is coverage of foreign decorations, foreign campaign medals, United Nations and NATO medals authorized Naval personnel. It is a single source full-color illustrated guide for all U.S. Navy medals and ribbons over the past almost 200 years.

The United States Armed Forces have produced over 100 new military awards in 70 plus years since the unification of the Armed Forces in 1947, or an average of over one new award per year. While the establishment of so many awards is a clear indication of the many missions and roles thrust upon the Armed Forces since the United States assumed its mantle of world leadership it also reflects the importance of medals and ribbons to an all volunteer Naval force. Medals and Ribbons of U.S. Navy is designed to be a definitive illustrated reference and guide covering United States Navy decorations, medals and ribbons for veterans, their families, active duty and reserve personnel. It is also meant as a single source for the military decorations and medals of every Navy veteran.

This feature require that you enable JavaScript in your browser.
END_OF_DOCUMENT_TOKEN_TO_BE_REPLACED

This feature require that you enable JavaScript in your browser.
END_OF_DOCUMENT_TOKEN_TO_BE_REPLACED