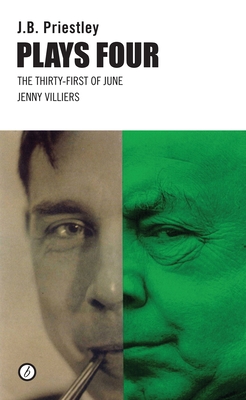 Two little known Priestley plays, which, while they are quite different, have important features in common.

The 31st of Juneis a comedy set partly in an advertising agency and partly in a medieval castle; Jenny Villiersis a serious play set backstage in an old provincial theatre. But both exploit elements of Time. In the 31st of June scenes switch between modern times and the middle ages, while characters move between both. There are kings, company bosses, princesses, fashion models, dwarves and two rival magicians. causing confusion and romance.

Jenny Villiers examines life in the Theatre. The doubts of the present are confronted by players from the past, and a jaded playwright recovers his faith in the Theatre. Both plays were performed on the stage, but later rewritten and published as novels.

J.B. Priestley: Born in Bradford, he was educated there and at Trinity Hall, Cambridge. His reputation as a dramatist was established by Dangerous Corner, Time and the Conways & other plays on space-time themes, as well as popular comedies such as Laburnum Grove & his psychological mystery, An Inspector Calls. Best known as a writer of novels, Priestley was also master of the essay form. He was an astute, original and controversial commentator on contemporary society.

This feature require that you enable JavaScript in your browser.
END_OF_DOCUMENT_TOKEN_TO_BE_REPLACED

This feature require that you enable JavaScript in your browser.
END_OF_DOCUMENT_TOKEN_TO_BE_REPLACED