Hopeless: Barack Obama and the Politics of Illusion (Paperback) 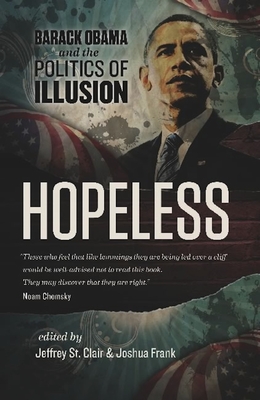 Those who feel that like lemmings they are being led over a cliff would be well-advised not to read this book. They may discover that they are right.--Noam Chomsky

"Jeffrey St. Clair and Joshua Frank have skillfully smoked out the real Barack Obama . . . the technofascist military strategist disguised as a Nobel Peace Laureate, but owned, operated, and controlled by Wall Street, Corporate America, and the Pentagon."--Thomas H. Naylor, co-author of Affluenza, Downsizing the USA

"The writers assembled here hit hard, with accuracy, and do not pull punches.--Marcus Rediker, author of The Slave Ship: A Human History

The Barack Obama revolution was over before it started, guttered by the politician's overweening desire to prove himself to the grandees of the establishment. From there on, other promises proved ever easier to break. Here's the book that dares not let Obama off the hook. It's all here: the compromises, the backstabbing, the same old imperial ambitions. Covering all major Obummer categories since he took office, this fast-paced collection will delight the critical and offer food for thought for those contemplating the 2012 electoral circus--and beyond.

Jeffrey St. Clair is co-editor of CounterPunch, author of Born Under a Bad Sky and Been Brown So Long it Looked Green to Me, and co-author of Whiteout: The CIA, Drugs, and the Press.

Joshua Frank is an environmental journalist and co-editor of Red State Rebels: Tales of Grassroots Resistance in the Heartland. His investigative reports and columns appear in CounterPunch, Chicago Sun-Times, Common Dreams, and AlterNet.

Jeffrey St.Clair: co-editor of Counterpunch, author of Born Under a Bad Sky and Been Brown So Long it Looked Green to Me and co-editor of Red State Rebels: Tales of Grassroots Resistance in the Heartland, Whiteout: The CIA, Drugs, and the Press and Dime's Worth of Difference: Beyond the Lesser of Two Evils.Joshua Frank: progressive journalist, author of Left Out!: How Liberals Helped Reelect George w.Bush, and co-editor of Red State Rebels: Tales of Grassroots Resistance in the Heartland.Kevin Alexander Gray is a civil rights organizer in South Carolina. He is also a contributing editor to Black News, was a former president of the South Carolina ACLU, and was Jesse Jackson's South Carolina campaign manager in 1988. He s author of Waiting for Lightning to Strike.Ralph Nader: Author of Unsafe at Any Speed, lecturer, attorney, and five-time campaigner for president of the US.Kathy Kelly is an author, pacifist, and three time Nobel Peace Prize nominee. She s author of Other Lands Have Dreams: From Baghdad to Pekin Prison.

"The book is not organized by topic; it’s a random, if chronological, ride through a catalog of catastrophes. But it’s united by the theme of horrendously bad government in the age of Obama. It ignores the mythology and treats Obama based on his actual performance." — David Swanson, FireDogLake

This feature require that you enable JavaScript in your browser.
END_OF_DOCUMENT_TOKEN_TO_BE_REPLACED

This feature require that you enable JavaScript in your browser.
END_OF_DOCUMENT_TOKEN_TO_BE_REPLACED