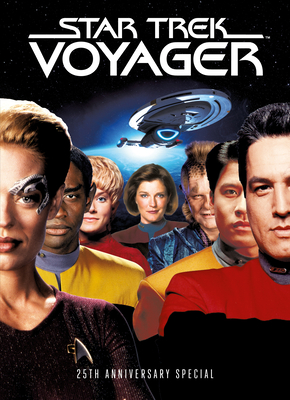 A behind-the-scenes souvenir guide to commemorate the 25th anniversary of Star Trek: Voyager.

A deluxe collector's edition offering a behind-the-scenes guide to the classic Star Trek series, featuring a selection of interviews and features on the characters, cast, and crew of Star Trek: Voyager with rarely seen photos and art.

Titan Magazines has been publishing the official Star Trek Magazine since 1995, and has since produced over 200 issues, featuring top journalists and exclusive access to the franchise. Titan is well known for it's movie and tv tie-in special editions, most recently having published movie tie-ins for Avengers: Endgame and Star Wars: The Last Jedi, but still continues to publish their first ever magazine title nearly 25 years on.

This feature require that you enable JavaScript in your browser.
END_OF_DOCUMENT_TOKEN_TO_BE_REPLACED

This feature require that you enable JavaScript in your browser.
END_OF_DOCUMENT_TOKEN_TO_BE_REPLACED