Voices from the Past: A Year of Great Quotations - And the Stories from History That Inspired Them (Hardcover) 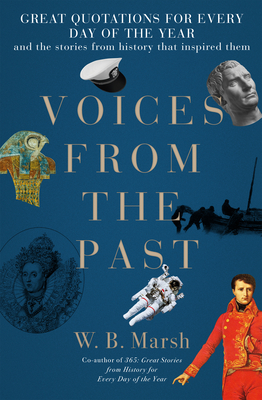 Every day of the year has witnessed some historical drama, large or small. W.B. Marsh - co-author of the acclaimed 365: Great Stories from History for Every Day of the Year - brings these events to life through quotations from the men and women of the time, and tells the stories attached to them. The result is a remarkable tour through world history from Ancient Egypt to the 21st century, packed full of vivid detail and colorful anecdotes.

On December 2, 1851 Louis Napoleon Bonaparte seizes power in France, just as his uncle Napoleon had done 52 years before, prompting Karl Marx's famous dictum: "History repeats itself, first as tragedy, then as farce."

Zulu King Cetshwayo, before the Battle of Isandlwana: "March slowly, attack at dawn and eat up the red soldiers." January 22, 1879.

"It is better to die on your feet than to live on your knees." On April 10, 1919, Mexican revolutionary Emiliano Zapata lives up to his own dictum by dying on his feet in a hail of bullets.

On March 26, 1827, the profoundly deaf Ludwig van Beethoven dies during a violent thunderstorm in Vienna, leaving us with his poignant last words: "I shall hear in heaven."

Voices from the Past is an incomparable selection of quotes - some famous, others not - and the stories behind them, together weaving a rich tapestry of our past that will delight any reader.

W. B. Marsh spent two years as an officer in the US Marine Corps, followed by a career in international advertising. Voices from the Past is his fourth book, after 365, 366 and Tales of War, all of which were written with Bruce Carrick, who died in 2017.

This feature require that you enable JavaScript in your browser.
END_OF_DOCUMENT_TOKEN_TO_BE_REPLACED

This feature require that you enable JavaScript in your browser.
END_OF_DOCUMENT_TOKEN_TO_BE_REPLACED