The Art and Making of Hannibal: The Television Series (Paperback) 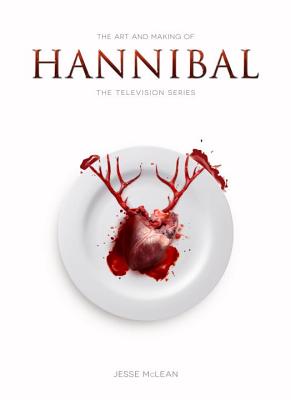 The Art & Making of Hannibal: The Television Series is a detailed look at the making of this highly original, critically lauded, and visually stunning series. Released ahead of the start of the 3rd season, this book will bring Fannibals into the world of secrets, lies, and intrigue of their beloved show.

With stars including Mads Mikkelsen, Hugh Dancy, Laurence Fishburne, Caroline Dhavernas and guest spots by Gillian Anderson, Eddie Izzard and Michael Pitt, Hannibal is one of the most elegant, engrossing and deliciously haunting shows on television today. The Art & Making of Hannibal: The Television Series celebrates all aspects of this unique show. A highly stylized illustrated book featuring extracts of the shooting scripts of the first and second seasons, exclusive cast and crew interviews, behind-the-scenes photography, production notes, storyboards, alongside Hannibal's sketches and music notations.

Hannibal Lecter was a brilliant psychiatrist in the employ of the FBI. His task: to help an unusually gifted criminal profiler, Will Graham, who is haunted by his ability to see into the minds of serial killers.

Jesse McLean is the award-winning author of pop culture books on the television shows Mad Men and How I Met Your Mother. His fiction has appeared in The Broken Social Scene Story Project: Short Works Inspired by You Forgot It In People and his humour has appeared in Reader’s Digest. He lives in Toronto.

“This book perfectly captures what was special about the show and the beauty behind it.” - Cinema Sentries

"Featuring highly stylized illustrations that would make the show itself proud, the book includes never-before-seen shooting scripts of the first and second seasons, exclusive cast and crew interviews, behind-the-scenes photography, production notes and storyboards, all connected by Hannibal's sketches and music notations that fill ever crevasse with menace and turn a behind-the-scenes text into a thrilling page turner." - Indiewire gift guide

"This is a must see show and a great book that highlights the grotesque glory of the series." - Joblo gift guide

"You the reader are absolutely brought into this sick and twisted circus of cruelty, finesse, style, and sophistication that undoubtedly is one of the most original TV programs of our generation." - Horror News

"The Art and Making of Hannibal is filled with both the style and substance that characterize Hannibal itself. Bon Appétit!" - Hypable

"Fitting with the show, the book is elegantly presented and designed, starting from its stark, embossed and spot-glossed cover to the striking inner layouts." - Crome Yellow

"you need this one on your plate." - Geekstronomy

"The fine folks at Titan Books have taken notice and collaborated with the show’s development team to create a beautiful behind the scenes look at what goes into crafting the perfect murder." -  Bloody Disgusting

"Long time horror and Hannibal fans will enjoy cast and crew insights as well as the in depth coverage on the special prop and make up effects used in the series." - Atomic Moo

"The fine folks at Titan Books have taken notice and collaborated with the show’s development team to create a beautiful behind the scenes look at what goes into crafting the perfect murder."- Bloody Disgusting

"If you're looking for something to kill time until the June 4th premiere, or if you want something to leave out in plain sight in hopes that a non-fan flips through it and realizes what they've been missing, it's worth every penny" - Birth. Movies. Death

"Like the show itself, this Hannibal book will turn your stomach on several occasions as you relive some of the most shocking moments from on-screen." -  Entertainment Buddha

"The page lay outs, and cover work, of this volume are very well done in a style that matches the look and feel of the show." - Atomic Moo

“The Art and Making of Hannibal: The Television Series” by Jesse McLean, now available in stores and online, has greater value than your typical marketing tie-in or coffee table book. It can be instructive in how to make better television." - Roger Ebert.com

"Unlike other procedural crime shows on TV that reveled in the gore,Hannibal’s murders could hang on the walls of modern art galleries." - Beamly

This feature require that you enable JavaScript in your browser.
END_OF_DOCUMENT_TOKEN_TO_BE_REPLACED

This feature require that you enable JavaScript in your browser.
END_OF_DOCUMENT_TOKEN_TO_BE_REPLACED