Why Steve Was Late: 101 Exceptional Excuses for Terrible Timekeeping (Paperback) 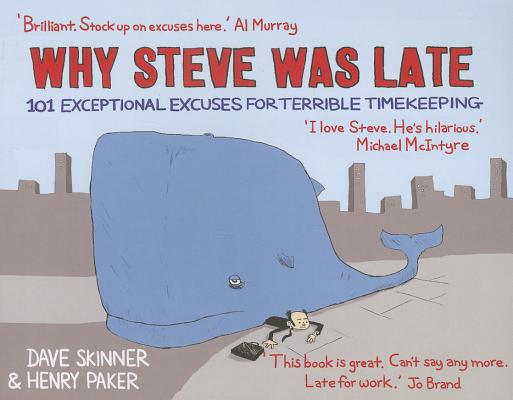 By Dave Skinner, Henry Paker
$11.95
Email or call for price.

A lifesaving collection of hilarious—and sometimes even plausible—excuses for being late, handily dreamed up and illustrated by someone else Ever been late? Steve has, 101 times this year alone—but he always has a good excuse! Here they are for you to enjoy, and maybe even borrow. Try, "I was overcome by the urge to alphabetize my pets," or perhaps a simple "Had ninja trouble." Steve has used both these excuses, and here they are hilariously illustrated. He also has claimed to have become temporarily feral, accidentally sold himself on eBay, and gotten stuck in a romantic montage. An illustration of Steve with Darth Vader accompanies the inarguable excuse "I was seduced by the Dark Side." He also gets lost in his duvet, and discovers he has a rather unusual superpower.

Dave Skinner is a writer and comedian who has worked with, among others, Steve Coogan, Rob Brydon, Armando Iannucci, Reeves & Mortimer, and Johnny Vegas. Henry Paker is a comedian and cartoonist whose illustrations have appeared in the Observer and the Spectator.

This feature require that you enable JavaScript in your browser.
END_OF_DOCUMENT_TOKEN_TO_BE_REPLACED

This feature require that you enable JavaScript in your browser.
END_OF_DOCUMENT_TOKEN_TO_BE_REPLACED