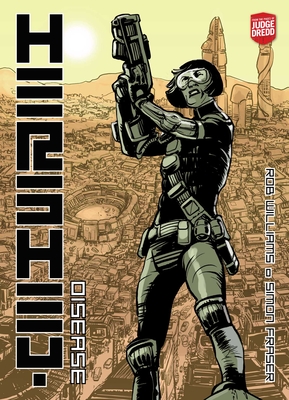 Fan favourite character Hershey stars in a new adventure by the star creative team of Rob Williams and Simon Fraser.

You think you know her story. Chief Judge of Mega-City One, Barbara Hershey had been a powerful ally to Judge Dredd, until she became infected with an alien pathogen and – supposedly - died. But little do the citizens and judges of Mega-City One suspect that Hershey’s death was faked.

Rob Williams is the writer of Suicide Squad and Martian Manhunter for DC Comics, Unfollow for Vertigo and Doctor Who: The Eleventh Doctor for Titan Comics. His previous work for 2000 AD includes Judge Dredd: Titan, The Grievous Journey Of Ichabod Azrael (And The Dead Left In His Wake) and The Ten-Seconders, and he is currently writing Roy of the Rovers for Rebellion.

Simon Fraser is best known to 2000 AD fans as the co-creator of Russian rogue Nikolai Dante, whose adventures have been a staple of the comic since his debut in 1997. Fraser is also the co-creator of Family in the Judge Dredd Megazine, and has drawn Judge Dredd and Shimura. His best-known non-2000 AD work is Lux & Alby: Sign On and Save the Universe, a collaboration with Scottish post-punk author Martin Millar. He is currently working on an adaptation of Richard Matheson’s Hell House and is also writing and drawing Lilly Mackenzie and the Mines of Charybdis.

"Interesting and brimming with a fresh style[...] a great, and fast read that is truly compelling.” - Multiversity Comics

"[Hershey] has given weight to a character who was always in the background, whose motivations and fears were rarely given move then a furrowed brow or slight snarl." - Comicsthegathering.com

"Hershey is a striking reading experience, it’s disturbing and hopeful at the same time, hopeful in the case of some justice being served." - Multiversity Comics

This feature require that you enable JavaScript in your browser.
END_OF_DOCUMENT_TOKEN_TO_BE_REPLACED

This feature require that you enable JavaScript in your browser.
END_OF_DOCUMENT_TOKEN_TO_BE_REPLACED