Erebus: One Ship, Two Epic Voyages, and the Greatest Naval Mystery of All Time (Paperback) 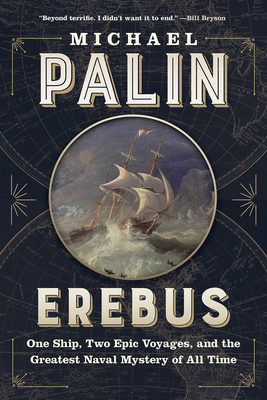 "Beyond terrific. I didn't want it to end." --Bill Bryson

Driven by a passion for travel and history and a love of ships and the sea, former Monty Python stalwart and beloved television globe-trotter Michael Palin explores the world of HMS Erebus, last seen on an ill-fated voyage to chart the Northwest Passage.

Michael Palin brings the fascinating story of the Erebus and its occupants to life, from its construction as a bomb vessel in 1826 through the flagship years of James Clark Ross's Antarctic expedition and finally to Sir John Franklin's quest for the holy grail of navigation--a route through the Northwest Passage, where the ship disappeared into the depths of the sea for more than 150 years. It was rediscovered under the arctic waters in 2014.

Palin travels across the world--from Tasmania to the Falkland Islands and the Canadian Arctic--to offer a firsthand account of the terrain and conditions that would have confronted the Erebus and her doomed final crew. Delving into the research, he describes the intertwined careers of the two men who shared the ship's journeys: Ross, the organizational genius who mapped much of the Antarctic coastline and oversaw some of the earliest scientific experiments to be conducted there; and Franklin, who, at the age of sixty and after a checkered career, commanded the ship on its last disastrous venture. Expertly researched and illustrated with maps, photographs, paintings, and engravings, Erebus is an evocative account of two journeys: one successful and forgotten, the other tragic yet unforgettable.

Michael Palin has written and starred in numerous television programs and films, from Monty Python to A Fish Called Wanda. He is also an acclaimed author, documentary filmmaker, and explorer. A former president of the Royal Geographical Society, his journeys have taken him to the North and South Poles, the Sahara Desert, the Himalayas, and Brazil. He lives in London, England.

This feature require that you enable JavaScript in your browser.
END_OF_DOCUMENT_TOKEN_TO_BE_REPLACED

This feature require that you enable JavaScript in your browser.
END_OF_DOCUMENT_TOKEN_TO_BE_REPLACED