Pointe Patrol: How nine people (and a dog) saved their neighborhood from one of the most destructive fires in California's history (Paperback) 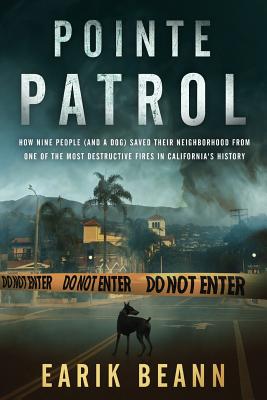 By Earik Beann
$16.95
On Our Shelves Now at Some of Our Stores

On October 9, 2017, California suffered one of the most destructive fires in its history. The Tubbs Fire burned 5,643 structures and killed twenty-two people in Sonoma County. The fire department was completely overwhelmed and was so busy trying to save lives that they had to let many houses burn rather than waste resources in trying to protect them. During this chaos, nine of us snuck back into our neighborhood in the mandatory evacuation zone and formed a vigilante fire force. We called ourselves the Pointe Patrol, and saved our neighborhood, as well as an apartment complex across the street from certain destruction.

As if the fires weren't enough, we found ourselves in the midst of anarchy, with looters running unchecked through the streets. We chased them out of houses with shovels, confronted them when they showed up in disguise, and patrolled the area with a completely over-the-top Doberman. The other neighbors who had evacuated organized themselves into our support network and supplied us with food and equipment, which they passed through to us across the police lines. My wife and I were part of that nine-person team and experienced all of this firsthand. This is the story of what happened at Viewpointe Circle during those two weeks in October.

This feature require that you enable JavaScript in your browser.
END_OF_DOCUMENT_TOKEN_TO_BE_REPLACED

This feature require that you enable JavaScript in your browser.
END_OF_DOCUMENT_TOKEN_TO_BE_REPLACED