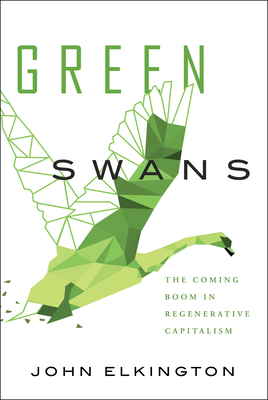 Even leading capitalists admit that capitalism is broken. Green Swans is a manifesto for system change designed to serve people, planet, and prosperity. In his twentieth book, John Elkington--dubbed the "Godfather of Sustainability"--explores new forms of capitalism fit for the twenty-first century.

If Nassim Nicholas Taleb's "Black Swans" are problems that take us exponentially toward breakdown, then "Green Swans" are solutions that take us exponentially toward breakthrough. The success--and survival--of humanity now depends on how we rein in the first and accelerate the second. Green Swans draws on Elkington's first-hand experience in some of the world's best-known boardrooms and C-suites. Using case studies, real-world examples, and profiles on emergent technologies, Elkington shows how the weirdest "Ugly Ducklings" of today's world may turn into tomorrow's world-saving Green Swans. This book is a must-read for business leaders in corporations great and small who want to help their businesses survive the coming shift in global priorities over the next decade and expand their horizons from responsibility, through resilience, and onto regeneration.

John Elkington is a writer, thought-leader, serial entrepreneur, and, at heart, an environmentalist. Described as the "Godfather of Sustainability," he has now written or co-authored 20 books, including the million-selling Green Consumer Guide series.Elkington has worked with many scores of corporations, often at the board and C-suite level, as well as with the financial community, industry bodies, government, the media, NGOs, academia, innovators, and entrepreneurs. Along the way, he has co-founded four social-purpose businesses since 1978, including Environmental Data Services (ENDS, 1978), John Elkington Associates/CounterCurrent (1983), SustainAbility (1987) and Volans Ventures (2008). All four still exist and the last two were respectively the second and first certified British B Corporations in the U.K.Over the years, Elkington has also served on over seventy boards and advisory boards, advising companies, non-profits and policy-making organizations. He is a visiting professor at the Cranfield School of Management, as well as at Imperial College London and University College London (UCL).In 2004, BusinessWeek described Elkington as "a dean of the corporate responsibility movement for three decades." He has received many awards and honors, including from the United Nations (Global 500 Roll of Honour, 1989). In 2005, he landed a "Social Capitalist of the Year" award from Fast Company, and that year was also awarded a three-year, $1 million field-building grant from the Skoll Foundation for Social Entrepreneurship. In 2011, he was awarded the Spencer Hutchens, Jr. Medal by the American Society for Quality (ASQ), for "outstanding leadership, as an advocate for social responsibility, and for bringing about positive social change." In 2014, he was awarded the Recycla/El Mercurio International Prize in Chile and in 2015 the Ethical Corporation Lifetime Achievement Award.

This feature require that you enable JavaScript in your browser.
END_OF_DOCUMENT_TOKEN_TO_BE_REPLACED

This feature require that you enable JavaScript in your browser.
END_OF_DOCUMENT_TOKEN_TO_BE_REPLACED