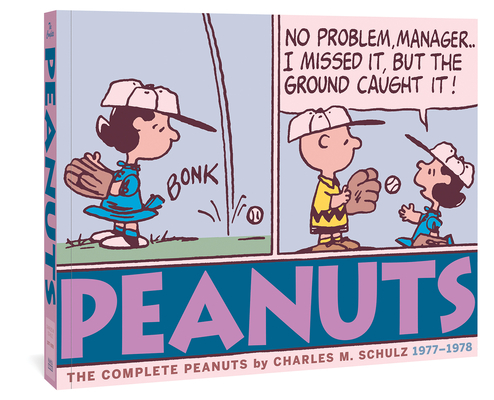 As the 1970s wind down, the last two recurring Peanuts characters have fallen into place: Snoopy's brother, Spike, and the youngest Van Pelt sibling, Rerun. When the EPA finds Charlie Brown guilty of biting the Kite-Eating tree, he goes on the lam and ends up coaching the "Goose Eggs," a group of diminutive baseball players: Austin, Ruby, Leland, and Milo. A tennis-playing Snoopy ends up teamed with the extreme Type "A" athlete Molly Volley... who then faces off against her nemesis, "Crybaby" Boobie. Add in Sally's new camp friend, Eudora, along with Linus’s new sweetheart, "Truffles," and you've got one of the most eclectic casts in Peanuts' great history.

Charles M. Schulz was born November 25, 1922, in Minneapolis. His destiny was foreshadowed when an uncle gave him, at the age of two days, the nickname Sparky (after the racehorse Spark Plug in the newspaper strip Barney Google). His ambition from a young age was to be a cartoonist and his first success was selling 17 cartoons to the Saturday Evening Post between 1948 and 1950. He also sold a weekly comic feature called Li'l Folks to the local St. Paul Pioneer Press. After writing and drawing the feature for two years, Schulz asked for a better location in the paper or for daily exposure, as well as a raise. When he was turned down on all three counts, he quit.

He started submitting strips to the newspaper syndicates and in the spring of 1950, United Feature Syndicate expressed interest in Li'l Folks. They bought the strip, renaming it Peanuts, a title Schulz always loathed. The first Peanuts daily appeared October 2, 1950; the first Sunday, January 6, 1952. Diagnosed with cancer, Schulz retired from Peanuts at the end of 1999. He died on February 13, 2000, the day before Valentine's Day-and the day before his last strip was published, having completed 17,897 daily and Sunday strips, each and every one fully written, drawn, and lettered entirely by his own hand — an unmatched achievement in comics.

Alec Baldwin is an Emmy and Golden Globe-award winning American actor, writer, producer, and comedian. He has appeared in films such as Beetlejuice, Blue Jasmine, The Hunt for Red October. He is also known for his role as Jack Donaghy in 30 Rock and his appearances on SNL.

This feature require that you enable JavaScript in your browser.
END_OF_DOCUMENT_TOKEN_TO_BE_REPLACED

This feature require that you enable JavaScript in your browser.
END_OF_DOCUMENT_TOKEN_TO_BE_REPLACED