Unconscious Bias in Schools: A Developmental Approach to Exploring Race and Racism (Paperback) 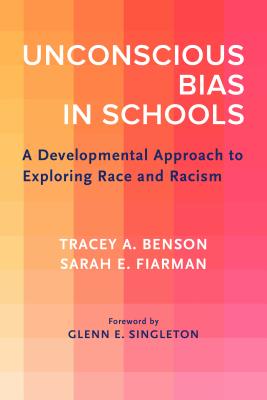 In Unconscious Bias in Schools, two seasoned educators describe the phenomenon of unconscious racial bias and how it negatively affects the work of educators and students in schools. "Regardless of the amount of effort, time, and resources education leaders put into improving the academic achievement of students of color," the authors write, "if unconscious racial bias is overlooked, improvement efforts may never achieve their highest potential." In order to address this bias, the authors argue, educators must first be aware of the racialized context in which we live. Through personal anecdotes and real-life scenarios, Unconscious Bias in Schools provides education leaders with an essential roadmap for addressing these issues directly. The authors draw on the literature on change management, leadership, critical race theory, and racial identity development, as well as the growing research on unconscious bias in a variety of fields, to provide guidance for creating the conditions necessary to do this work--awareness, trust, and a "learner's stance." Benson and Fiarman also outline specific steps toward normalizing conversations about race; reducing the influence of bias on decision-making; building empathic relationships; and developing a system of accountability. All too often, conversations about race become mired in questions of attitude or intention-"But I'm not a racist " This book shows how information about unconscious bias can help shift conversations among educators to a more productive, collegial approach that has the potential to disrupt the patterns of perception that perpetuate racism and institutional injustice. Tracey A. Benson is an assistant professor of educational leadership at the University of North Carolina at Charlotte. Sarah E. Fiarman is the director of leadership development for EL Education, and a former public school teacher, principal, and lecturer at Harvard Graduate School of Education.

Tracey A. Benson is an assistant professor of educational leadership at the University of North Carolina at Charlotte. He received his Ed.L.D. in education leadership from the Harvard Graduate School of Education and master's of school administration from the University of North Carolina-Chapel Hill. He has been a classroom teacher at the elementary level, vice principal at the middle school level, professional development specialist at the district level, and principal at the high school level. He has served as a school and district leader in Texas, North Carolina, Florida, and Massachusetts. As a high school principal, Tracey eliminated inequitable teaching and discipline practices, partnered with local organizations, and mentored struggling students as a means of addressing racial and socioeconomic inequities within the schools and surrounding communities. His efforts in leading for social justice significantly decreased the suspension rates of students of color and students from low socioeconomic backgrounds, while increasing the academic achievement of all students who attended the schools where he served. As a doctoral candidate, Tracey cofounded the Harvard Graduate School of Education's first Ethnic Studies course. The course sought to provide students with a counternarrative to traditional US history by highlighting the histories and experiences of Native Americans, African Americans, Latinos/as, and Asian Americans. Tracey also coauthored a teaching case, "Lessons from Ferguson: Leadership in Times of Civil Unrest," aimed at helping schools and school districts understand the nuances of structural racism. After publishing the teaching case with Harvard Education Press, Tracey, along with his co-case writer, traveled nationally to school districts, organizations, and conferences to present their work and facilitate discussions aimed at helping participants understand the meaning of structural racism and identifying purposeful practices in their own communities for overturning it. Tracey has committed his career to leading for change, courageously addressing entrenched practices that impede lifetime outcomes of students of color. As an assistant professor of educational leadership, Tracey's research focuses on analyzing the relationship between educational leadership and dismantling structural racism in K-12 schools. He examines and offers best practices for how educational leaders can lead for social justice and advocate for racial equity. In addition to coauthoring the teaching case, Tracey has authored many other pieces, including, "Leadership Amidst Racial Trauma and Unrest: UNC Charlotte's Response to the Shooting of Keith Scott" (Journal of Cases in Educational Leadership); "Stemming Teacher Shortages: A Community Apprenticeship Model" (a chapter in From Head to Heart); and "To Google Translate or not? Newcomer Latino Communities in the Middle" (Middle School Journal). Sarah E. Fiarman is the director of leadership development with EL Education, a national, nonprofit organization partnering with schools and districts to ensure all students have access to challenging, engaging, and empowering learning. Sarah became an educator out of a commitment to teach anti-racism to all students and ensure that black and brown students received the excellent education they were too often denied. Over the years, her aims have shifted to include a focus on helping white people (starting with herself) see their role in perpetuating racial inequities and their responsibility to continually work to change these behaviors. A former public school teacher and principal, Sarah is the author of Becoming a School Principal: Learning to Lead, Leading to Learn and a coauthor of Instructional Rounds in Education: A Network Approach to Improving Teaching and Learning. Sarah is also a contributing author of books from the Data Wise Project at Harvard Graduate School of Education. While teaching, Sarah was a National Board Certified Teacher, Responsive Classroom Consulting Teacher, and trained facilitator with Seeking Educational Equity and Diversity. She co-led the parent-teacher anti-racism/anti-bias discussion group and, with her teaching team, was awarded the Cambridge Peace and Justice award. As a principal, she was awarded a Lynch Leadership Academy Fellowship through Boston College, and in 2013, the Boston Globe rated her school the "#1 Dream School in Massachusetts" based primarily on student academic growth scores. She served as lecturer and director of field placement in the School Leadership Program at Harvard Graduate School of Education, where she also cofounded and co-led the faculty group discussing race and racism. She received her EdD from Harvard Graduate School of Education in administration, planning, and social policy.

This feature require that you enable JavaScript in your browser.
END_OF_DOCUMENT_TOKEN_TO_BE_REPLACED

This feature require that you enable JavaScript in your browser.
END_OF_DOCUMENT_TOKEN_TO_BE_REPLACED