Reclaiming My Decade Lost in Scientology: A Memoir (Paperback) 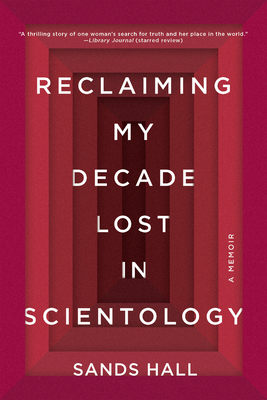 With its keen attention to the language and tactics of the church, Hall's memoir is unique among the assortment of Scientology reports and exposés, offering insight into the certainties that its subjects gain. --The Nation In the secluded canyons of 1980s Hollywood, Sands Hall, a young woman from a literary family, strives to forge her own way as an artist. But instead, Hall finds herself increasingly drawn toward the certainty that Scientology appears to offer. Her time in the Church includes the secretive illness and death of its founder, L. Ron Hubbard, and the ascension of David Miscavige. In this compelling memoir, Hall reveals what drew her into the religion--with its intrigues and unique contemporary vision--and how she came to confront its darker sides and finally escape. Some of the most penetrating, illuminating prose about how an educated and skeptical person could get so deeply into, and then struggle to escape, what everyone around her warned was a dangerous cult . . . brilliant. --The Underground Bunker If it is Scientology's offer of a life with meaning that hauls her in . . . it is its approach to meaning that keeps her . . . Hall's fascination with this is palpable. --Camille Ralphs, The Times Literary Supplement

Sands Hall is the author of the novel Catching Heaven, a WILLA Award Finalist for Best Contemporary Fiction, and a Random House Reader's Circle selection; and of a book of writing essays and exercises, Tools of the Writer's Craft. She teaches at the Iowa Summer Writing Festival and at the Community of Writers at Squaw Valley, and is an associate teaching professor at Franklin & Marshall College in Lancaster, Pennsylvania.

This feature require that you enable JavaScript in your browser.
END_OF_DOCUMENT_TOKEN_TO_BE_REPLACED

This feature require that you enable JavaScript in your browser.
END_OF_DOCUMENT_TOKEN_TO_BE_REPLACED