Pharaohs of the Sun: The Rise and Fall of Tutankhamun's Dynasty (Hardcover) 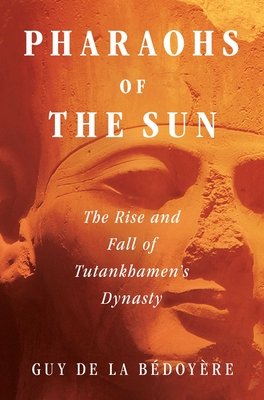 A vivid story of an astonishing period in ancient Egypt’s history—1550 BC to 1295 BC—that tears away the gold and glamour to reveal how these great pharaohs ruthlessly ruled Egypt for two hundred and fifty years.

For more than two centuries, Egypt was ruled by the most powerful, successful, and richest dynasty of kings in its long end epic history. They included the female king Hatshepsut, the warrior kings Thutmose III and Amenhotep II, the religious radical Akhenaten and his queen, Nefertiti, and most famously of all—for the wealth found in his tomb—the short-lived boy king, Tutankhamun. The power and riches of the Pharaohs of the 18th Dynasty came at enormous cost to Egypt's enemies—and to most of its people. This was an age of ruthless absolutism, exploitation, extravagance, brutality, and oppression in a culture where not only did Egypt plunder its neighbors, but Egyptian kings (and their people) robbed one another.

3,500 years ago, ancient Egypt began two centuries of growth where it became richer and more powerful than any other nation in the world, ruled by the kings of the 18th Dynasty. They presided over a system built on war, oppression, and ruthlessness, pouring Egypt's wealth into grandiose monuments, temples, and extravagant tombs. Tutankhamun was one of the last of the line—and one of the most obscure. Among his predecessors were some of the most notorious and enigmatic figures of all of Egypt's history.

Pharaohs of the Sun is the story of these famed rulers, showing how their glamour and gold became tainted by selfishness, ostentation, and the systematic exploitation of Egypt's people and enemies.

Guy de la Bédoyère has written a several books on the Roman world, including Gladius; Domina: The Women Who Made Imperial Rome; Praetorian; and The Real Lives of Roman Britain for Yale University Press. He is well known to a wide audience because of the fifteen years he participated in Britain’s Channel 4’s archaeology series, Time Team. Guy is a Fellow of the Society of Antiquaries and is an accredited lecturer of the Arts Society. He lives in Britain.

"A scrupulous yet accessible history of ancient Egypt under the 18th Dynasty. Complemented by striking illustrations and valuable appendices, this impressive survey will be welcomed by ancient history buffs."
— – Publishers Weekly

“In his encyclopedic Gladius, Guy de la Bédoyère collects pretty much every fact known about what it was like to be in the military arm of the Roman Empire.”
— Thomas E. Ricks, The New York Times Book Review

"A splendid book that brings to life in its scholarship and animated style the lives of some of the most remarkable soldiers the world has ever seen. Gladius will be an absolute delight for those who are fascinated by the life and achievements of the world’s first and probably greatest professional army."
— Military History Matters

“Gladius is a highly successful introduction to the life of the Roman soldier. Making use of a wide range of sources, from stone inscriptions to colorful anecdotes, de la Bédoyère’s informative and readable book offers real immediacy to readers.”
— Clifford Ando, University of Chicago

“Gladius is a necessary work for scholars of Roman history, but will also prove interesting and informative reading for the armchair historian.”
— New York Military Affairs Review

“An illuminating and highly readable narrative about the role of women at the center of imperial Rome—fascinating and important.”
— Lesley Adkins, author of Handbook to Life in Ancient Rome

"The dramatic story of the soldiers at the heart of the Roman empire. Lively and full of insight, de la Bedoyere traces the history of the praetorians and the emperors they served, murdered and made, through three hundred years of intrigue and drama."
— Adrian Goldsworthy, author of Philip and Alexander: Kings and Conquerors

“A lively and up-to-date history of the Praetorian Guard, the anti-coup divisions of the Roman emperors from Augustus to Constantine. De la Bédoyère tells their story with clarity and panache, and his book can be most warmly recommended both to aspiring tyrants and the ordinary armchair historian.”
— The Sunday Times (London)

This feature require that you enable JavaScript in your browser.
END_OF_DOCUMENT_TOKEN_TO_BE_REPLACED

This feature require that you enable JavaScript in your browser.
END_OF_DOCUMENT_TOKEN_TO_BE_REPLACED