Pictures of a Gone City: Tech and the Dark Side of Prosperity in the San Francisco Bay Area (Spectre) (Paperback) 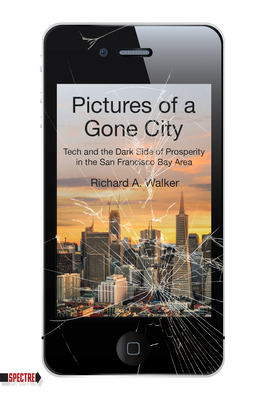 This exploration begins by tracing the concentration of IT in Greater Silicon Valley and the resulting growth in start-ups, jobs, and wealth. This is followed by a look at the new working class of color and the millions earning poverty wages. The middle chapters survey the urban scene, including the housing bubble and the newly exploded metropolis, and the final chapters take on the political questions raised by the environmental impact of the boom, the fantastical ideology of TechWorld, and the tech-led transformation of the region.

Richard A. Walker is professor emeritus of geography at the University of California, Berkeley and the director of the Living New Deal Project, whose purpose is to inventory all New Deal public works sites in the United States and recover the lost memory of government investment for the good of all.

"San Francisco has battened from its birth on instant wealth, high tech weaponry, and global commerce, and the present age is little different. Gold, silver, and sleek iPhones — they all glitter in the California sun and are at least as magnetic as the city’s spectacular setting, benign climate, and laissez-faire lifestyles. The cast of characters changes, but the hustlers and thought-shapers eternally reign over the city and its hinterland, while in their wake they leave a ruined landscape of exorbitant housing, suburban sprawl, traffic paralysis, and delusional ideas about a market free enough to rob the majority of their freedom. Read all about it here, and weep." —Gray Brechin, author, Imperial San Francisco: Urban Power, Earthly Ruin

"…his endeavor for comprehensiveness succeeds in holding impressively many strands in the analytical mix. Despite the book’s firm situation within geographical political economy and classical Marxian questions of labor exploitation, surplus value extraction, and uneven development, it clearly makes an effort to incorporate more polyvocal and intersectional political economic work on race and gender..." —Sarah Knuth, Antipode

"Too many studies of cities dwell on their peculiarities; this fascinating book balances the dramatic story of the Bay Area against a profound understanding of urbanization. It eschews a descriptive narrative in favor of hard-hitting critical analysis. The book is not only about the inherently contradictory development of the San Francisco region, but also about where it stands in relation to the rest of the United States, even the world and why it matters so much. No one but Richard Walker combines such an intimate knowledge of one city with the theoretical insights necessary to make sense of it." —Kevin Cox, author, The Politics of Urban and Regional Development and the American Exception

"Berkeley geographer Richard Walker, another Bay Area fixture, has produced the kind of book only an embedded scholar with enviable endurance can create: a deep, virtuosic saga supported by mounds of data and fieldwork. His Pictures of a Gone City: Tech and the Dark Side of Prosperity in the San Francisco Bay Area echoes and updates many of Solnit’s and McClelland’s subjects’ laments, while also explaining, in great detail, how the conditions for their shared concern came to be: how San Francisco became a hotbed of counterculture, environmental activism, and technological innovation, and why those distinctions are now in tension and under threat." —Shannon Mattern, https://www.publicbooks.org/san-francisco-or-how-to-destroy-a-city/

"Debunking the Horatio Alger-promotional blather of self-flattering tech moguls, the real Bay Area comes into view, based on nurses and teachers, drivers and clerks, homeless and the desperate. Real estate bubbles have given way to tech bubbles which have given way to housing bubbles, and now have given way to a chimerical prosperity that is as fragile as any of the prior ones." —Chris Carlsson, San Francisco historian and co-founder, Critical Mass

Richard A. Walker celebrates his book Pictures of a Gone City: Tech and the Dark Side of Prosperity in the San Francisco Bay Area from PM Press. This sweeping account of the Bay Area in the age of the tech boom covers many bases. —"Book Talk," City Lights Bookstore podcast, http://www.citylightspodcast.com/richard-a-walker/

"Walker has given us a brilliantly accessible and fact-laden political economy of the San Francisco Bay Area—America's richest and fastest changing metropolis. Pictures of a Gone City explains both the miracle of Silicon Valley and the heavy price, in growing inequality, unaffordability, and environmental impact, that the Bay Area is paying for it.” —Wendy Brown, author, Undoing the Demos: Neoliberalism's Stealth Revolution

"With Pictures of a Gone City, California’s greatest geographer tells us how the Bay Area has become the global center of hi-tech capitalism. Drawing on a lifetime of research, Richard Walker dismantles the mythology of the New Economy, placing its creativity in a long history of power, work, and struggles for justice." —Jason W. Moore, author, Capitalism in the Web of Life

"...a tour de force of class analysis, geographic history, and prediction of the future of the Bay Area’s tech sector." —Max Moorhead, The Brooklyn Rail

"Pictures of a Gone City is a remarkably instructive, richly researched, and masterfully crafted reflection on the perils of what passes for progress and prosperity under the modern system of class rule that we call capitalism." —Paul Street, www.nyjournalofbooks.com

"The Bay Area’s tech boom and the `dark side of prosperity': Q&A with Richard Walker. The geographer Richard Walker is out with an unflinching examination of the San Francisco Bay Area, the epicenter of the tech boom—and he opens the book with a poem published more than a half-century before the iPhone: 'The world is a beautiful place / to be born into / if you don’t mind happiness / not always being / so very much fun / if you don’t mind a touch of hell / now and then / just when everything is fine / because even in heaven / they don’t sing / all the time,' it begins. The work by Lawrence Ferlinghetti—Pictures of a Gone World—has always resonated with Walker, and it inspired the title of his new book: Pictures of a Gone City: Tech and the Dark Side of Prosperity in the San Francisco Bay Area." —San Jose Mercury News

"Richard Walker is quoted multiple times in the article talking about the ridiculous price of housing in the San Francisco Bay Area, with a link to the book as well: 'It sounds ridiculous, but it’s not,' said Richard A. Walker, a professor emeritus of geography at U.C. Berkeley and the author of a recent book about the tech boom and displacement in the Bay Area. As the tech industry has drawn legions of highly paid workers to the area, home prices aren’t the only thing that has gone up. Transportation, utilities and food are also costly... 'The very success of the place undermines the viability of life for at least the lower half, if not the lower two-thirds,' Mr. Walker said, 'And those are the people who get forgotten in the narrative of the glamour of tech changing the world.'" —New York Times

"Walker’s new book is urban geography for our times. It illuminates the basic crisis and contradiction of the San Francisco Bay Area, which is an example of capitalism at its most innovative and dynamic, and simultaneously the site of severe inequality and failing public policies and infrastructure. Walker has lived and worked in the Bay Area for most of his life. I was delighted to speak with him about topics ranging from the real geographic definition of the Bay Area, to its history of innovation (stretching back to the Gold Rush days), to the contemporary movements that might help the Bay Area reclaim its radical roots." —City Lab (extension of The Atlantic Magazine)

This feature require that you enable JavaScript in your browser.
END_OF_DOCUMENT_TOKEN_TO_BE_REPLACED

This feature require that you enable JavaScript in your browser.
END_OF_DOCUMENT_TOKEN_TO_BE_REPLACED