Sailing to Freedom: Maritime Dimensions of the Underground Railroad (Paperback) 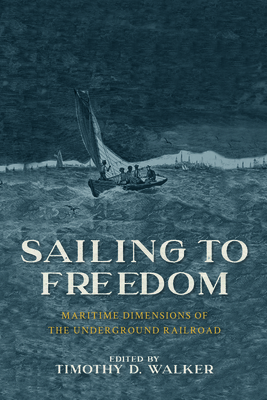 In 1858, Mary Millburn successfully made her escape from Norfolk, Virginia, to Philadelphia aboard an express steamship. Millburn's maritime route to freedom was far from uncommon. By the mid-nineteenth century, an increasing number of enslaved people had fled northward along the Atlantic seaboard. While scholarship on the Underground Railroad has focused almost exclusively on overland escape routes from the antebellum South, this groundbreaking volume expands our understanding of how freedom was achieved by sea and what the journey looked like for many African Americans.

With innovative scholarship and thorough research, Sailing to Freedom highlights little-known stories and describes the less-understood maritime side of the Underground Railroad, including the impact of African Americans' paid and unpaid waterfront labor. These ten essays reconsider and contextualize how escapes were managed along the East Coast, moving from the Carolinas, Virginia, and Maryland to safe harbor in northern cities such as Philadelphia, New York, New Bedford, and Boston.

TIMOTHY D. WALKER is professor of history at University of Massachusetts Dartmouth.

"Sailing to Freedom recovers a neglected but crucial part of the past—and does so with flair and drama as heroic historical characters engage in gripping maritime adventures. This splendid collection of essays establishes, once and for all, the importance of the seaborne struggle against slavery."—Marcus Rediker, author of The Slave Ship: A Human History

"Sailing to Freedom connects the world of seafaring with the lives of runaway slaves in so many compelling ways that the reader cannot help but think the Underground Railroad should be renamed."—Christopher P. Magra, author of Poseidon's Curse: British Naval Impressment and Atlantic Origins of the American Revolution

"The central question of the volume—To what extent are maritime escapes rightfully referred to as part of the Underground Railroad?—leads to an expanded understanding of what the path to freedom in nineteenth-century America looked like."—Jeffrey A. Fortin, coeditor of Atlantic Biographies: Individuals and Peoples in the Atlantic World

This feature require that you enable JavaScript in your browser.
END_OF_DOCUMENT_TOKEN_TO_BE_REPLACED

This feature require that you enable JavaScript in your browser.
END_OF_DOCUMENT_TOKEN_TO_BE_REPLACED