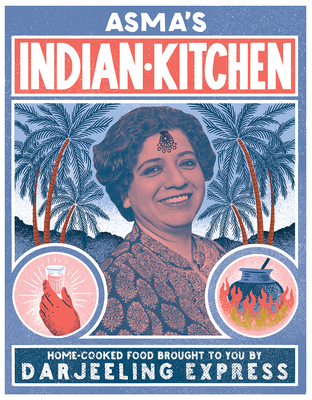 FEED YOUR SOUL WITH ASMA KHAN’S COLLECTION OF AUTHENTIC INDIAN RECIPES ASMA KHAN STARS IN NETFLIX’S AWARD-WINNING SERIES CHEF’S TABLE Award-winning restaurant Darjeeling Express began life as a dinner party with friends; Indian food lovingly cooked from family recipes that go back generations. In this book, Asma reveals the secret to her success, telling her immigrant’s story and how food brought her home. The recipes pay homage to her royal Mughlai ancestry and follow the route of the Darjeeling Express train from the busy streets of Bengal, through Calcutta, where she grew up, and along the foothills of the Himalayas to Hyderabad. Platters of dishes boasting texture and intense flavor encourage you to gather for a traditional dawaat (feast). Starting with simple midweek Feasts for Two, Asma then reveals the way to quick and easy cooking with less spice for Family Feasts. There are Feasts for Friends, for when you want to show off a little, and Celebratory Feasts. Many of the recipes are vegetarian, there are sweet treats and drinks, too, and all feature alongside lesser-known recipes and stories unique to Asma’s family. This is more than just a collection of delicious and accessible recipes, it is a celebration of heritage, culture, community and quality. This is Asma’s Indian Kitchen.

Asma Khan is chef and restaurateur of London’s acclaimed Darjeeling Express, which began as a supper club, then a pop-up, before settling in its permanent location to wide acclaim. Asma’s food is homage to her royal Mughlai ancestry and the busy streets of Calcutta, where she grew up. An all-women team of housewives runs the kitchen at Darjeeling Express, which has been featured in Time Out, Harper’s Bazaar, the Guardian, and numerous others. In 2015, it was named as one of the best restaurants in London by the Evening Standard. In 2017, Eater named it as one of its most impressive restaurant newcomers. Asma stars in Netflix’s award-winning series Chef’s Table.

'[A] celebration of heritage and culture that makes a feast out of every meal.' --Woman & Home magazine

"Our favorite travel-inspiring cookbooks from 2019 ' Anywhere in the world you can learn the rituals, history, and even geography of a place through a shared mealno words needed. But you don't need to hop on a flight to soak up everything a country's cuisine has to offer. In fact, the inspiration often works the other way around: we're exposed to slices of other cultures back home that move us to go to the source. If you're ambitious, that exposure can even start in your kitchen with the right cookbook. For the armchair traveler, the one prepping for an upcoming trip, or those just looking to reminisce about a recent vacation, these books will do the trick. (They also make no-brainer gifts.) ' If you're a fan of Netflix's €˜Chef's Table,' you might recognize Asma Khan ' In her debut cookbook, Asma traces her personal and family history through Bengal and the Himalayas, to the cities of Calcutta and Hyderabad, sharing the memoriesand recipesthat shaped her ' The stories themselves are transportive, but, for the home chef, the book also provides an accessible introduction to regional Indian cooking. The recipes, all of which are framed as shareable €˜feasts' of varying sizes (for just two, or for a whole party), span mains like curries and vegetable dishes, sides that lean on basmati rice, drinks, and even desserts. And if you flip through and aren't familiar with many of the dishes, that's a good sign.
— Conde Nast Traveler, The 11 Best Cookbooks for Eating Your Way Around the World

Whether fresh or dried, vegetables are major players in Asma's Indian Kitchen by London chef/restaurateur Asma Khan. With a minimum of peeling and chopping, and the judicious addition of spices, familiar vegetables become exciting food in Khan's book. Many of her recipes start with whole spices added to a hot pan until the oils trapped in the spice seeds are released. A quick grind in a spice grinder or with a mortar and pestle, and these fragrant seasonings are ready to flavor the likes of mashed potatoes, sautÃ©ed eggplant, chopped carrots, cauliflower florets or butternut squash. Khan includes concise and helpful directions in 80-plus recipes for meat, fish, vegetables and more ' The book is divided into dishes for two, family dishes and fancy party cooking. Photographs by Kim Lightbody are beautiful.

Brought up in the stifling summer heat of Calcutta, Khan recalls the childhood joy and relief of boarding the Darjeeling Express. The railroad carried her up into the Himalayas' cooling breezes. So when she opened her London restaurant, the first name that came to mind was that of this glorious train. Since then, Darjeeling Express has become Londoners' Soho go-to for great cooking from her team of female chefs. Khan's cuisine reflects that of the Mughal Empire, which used a subtler range of spices than common in later Indian cooking. Khan shares her own formula for spicing foods, and she explains how to make superior garam masala. She also instructs in the judicious preparation of chili peppers to please both the timid palate and the fire-eater. Another shared secret involves properly frying onions. Alongside brilliant color photographs, Khan uses clear directions and measurements; and, thanks to online resources, feasting like a royal Mughal can happen anywhere.

Following the rout of the Darjeeling Express, Asma Khan's highly anticipated debut cookbook takes us on a journey to preserve the historical tradition of Mughlai food.

Khan, owner of London's acclaimed Darjeeling Express restaurant and a subject of Netflix's Chef's Table documentary series, shares a delightful collection of personal recipes sure to entice lovers of Indian food. Khan divides her alluring recipes into feasts for two, family feasts, eating with friends, and celebratory feasts. Readers will discover a range of vibrant dishes suitable for busy weeknights or special occasions. Chingri bhaaja (shrimp sautÃ©ed with butter and chilis) and saag paneer (spinach with Indian cheese)both for two peoplereflect the savory diversity of the cuisine. A luscious cheese korma (in family-sized portions) and a hearty spiced red lentil dish called khichree (perfect for entertaining) will tempt those unfamiliar with the complex flavors of Indian cooking. For those intimidated by the spiciness of the cuisinelike the author's sonKhan provides flavorful recipes for dum gosht (roast beef cooked with mild Indian spices) and boors chenni ki kheer (rice pudding with brown sugar). Cooks looking to make authentic Indian meals at home will not be disappointed. Khan cooks from the heart, and her appetizing dishes and expert guidance are not to be missed.

This feature require that you enable JavaScript in your browser.
END_OF_DOCUMENT_TOKEN_TO_BE_REPLACED

This feature require that you enable JavaScript in your browser.
END_OF_DOCUMENT_TOKEN_TO_BE_REPLACED