The Scandal of Money: Why Wall Street Recovers but the Economy Never Does (Hardcover) 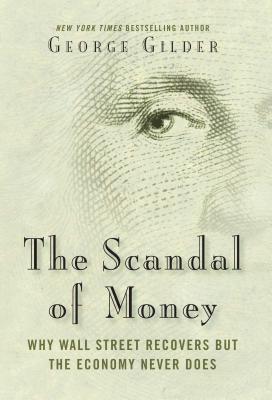 "Why do we think governments know how to create money? They don't. George Gilder shows that money is time, and time is real. He is our best guide to our most fundamental economic problem."  --Peter Thiel, founder of PayPal and Palantir Technologies

"Thirty-five years ago, George Gilder wrote Wealth and Poverty, the bible of the Reagan Revolution. With The Scandal of Money he may have written the road map to the next big boom."  --Arthur B. Laffer, coauthor of the New York Times bestseller An Inquiry into the Nature and Causes of the Wealth of States

"Gilder pushes us to think about the government monopoly on money and makes a strong case against it. If you believe in economic freedom, you should read this book." --Senator Jim DeMint, president of The Heritage Foundation

In his groundbreaking new book, The Scandal of Money, Gilder unveils a radical new explanation for our economic woes.  Gilder also exposes the corruption of the Federal Reserve, Washington power-brokers, and Wall Street’s “too-big-to-fail” megabanks, detailing how a small cabal of elites have manipulated currencies and crises to stifle economic growth and crush the middle class.

Gilder spares no one in his devastating attack on politicians’ economic policies.  He claims that the Democrats will steer us to ruin – but points out that Republicans are also woefully misguided on how to salvage our economic future.  With all major polls showing that voters rank the economy as one of the top three “most important problems” facing the nation, Gilder’s myth-busting, paradigm-shifting recipe for economic growth could not come at a more critical time.

In The Scandal of Money, the reader will learn:

George Gilder, editor in chief of Gilder Technology Report, is chairman of Gilder Publishing LLC, located in Great Barrington, Massachusetts. A cofounder of Discovery Institute, Mr. Gilder is a senior fellow of the Center on Wealth, Poverty, and Morality, and also directs Discovery’s program on high technology and public policy.

Gilder is perhaps known best for his 1981 book, Wealth and Poverty, which became an instant classic, truly serving as the supply-side economics bible of the Reagan revolution. The book, a New York Times bestseller, has sold more than a million copies since its initial release. According to a study of presidential speeches, Gilder was President Reagan’s most frequently quoted living author. In 1986, President Reagan gave George Gilder the White House Award for Entrepreneurial Excellence.

His New York Times bestseller Knowledge and Power (Regnery, 2013), presented a new theory of economics, based on the breakthroughs from information theory that enabled the computer revolution and the rise of the Internet. In a review, Steve Forbes stated that the book “will profoundly and positively reshape economics… [and] will rank as one of the most influential works of our era.” The book won the Leonard E. Read prize at FreedomFest in Las Vegas in 2013.

Mr. Gilder is a contributing editor of Forbes magazine and a frequent writer for the Economist, the American Spectator, the Harvard Business Review, the Wall Street Journal, and other publications. He lives in Tyringham, Massachusetts, in the Berkshire Mountains, where he is an active churchman, sometime runner, and with his wife Nini, parent of four children.

This feature require that you enable JavaScript in your browser.
END_OF_DOCUMENT_TOKEN_TO_BE_REPLACED

This feature require that you enable JavaScript in your browser.
END_OF_DOCUMENT_TOKEN_TO_BE_REPLACED