Sketch and Finish: The Journey from Here to There (Paperback) 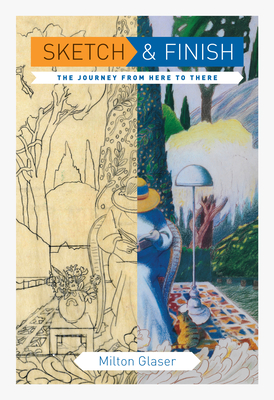 Design legend Milton Glaser demystifies his creative process in this thoughtful collection of illustrations showing his journey from sketch to finish. Glaser is a truly multidisciplinary designer working in exhibition, interior, and product designs. Sketch and Finish features a variety of projects, from little known to iconic, including the logo. Glaser writes, "The tentativeness in the act of sketching is crucial. Doubt is essential. If you already know the answer before you start, why bother? Conviction is the killer of imagination." He illuminates the crux of each work with grace and a timeless mastery of craft.

Milton Glaser (b. 1929) is among the most celebrated graphic designers working today. He co-founded the revolutionary Pushpin Studios in 1954, founded New York Magazine with Clay Felker in 1968, established Milton Glaser, Inc. in 1974, and teamed with Walter Bernard in 1983 to form the publication design firm WBMG. He was selected for the lifetime achievement award of the Cooper Hewitt National Design Museum (2004) and the Fulbright Association (2011), and in 2009 he was the first graphic designer to receive the National Medal of the Arts award.

"If you're lucky enough, not only does the start of the Christmas season bring plenty of festive cheer, but it also brings snow. And snowy wonderlands the world over are what author William Morgan set out to capture in his new book Snowbound: Dwelling in Winter. He features stunning cabins set in dramatic, wintry landscapes and celebrates how structures can coexist with even the harshest of elements."
- American Farmhouse Style

"The design legend demystifies his creative process in this thoughtful and visually stimulating collection of illustrations showing his journey from sketch to finish....As he purposefully intends for the reader, it is fascinating to see the paths one's mind takes from the spark of a thought."
- Chronogram

"The late designer Glaser (1929-2020) illuminates his creative process from concept through final product in this enlightening work....Succinct and insightful, Glaser's work will inspire illustrators, artists, and visual stylists in their creative endeavors."
- Publishers Weekly

"When Milton Glaser died in June, he left behind a rich paper trail that revealed his kinetic, inquisitive mind, a treasure trove celebrated in his last book Sketch and Finish: The Journey from Here to There. Flipping through it, one senses how much Glaser relished the metamorphosis of a notion into a fully fleshed idea, from the loose studies that became the triumphant marquee for Tony Kushner's Angels in America to the original version of his famous psychedelic Bob Dylan poster, which featured the musician's signature harmonica."
- Town & Country

"You might say Sketch & Finish is an album of Glaser's greatest hits, but it is much more than the hits and a couple of misses (there are a couple where the sketch is better than the finish but I will refrain from pointing them out; you should find them for yourselves). The book illustrates Glaser's teaching agenda, which is to say, one makes sketches to explore the unknown (the 'tentative' nature of creativity) not to validate the existence of a predetermined outcome. As he states in his brief but spot-on introduction on the reason for sketching: 'If you know the answer before you start, why bother?'"
- Design Observer

This feature require that you enable JavaScript in your browser.
END_OF_DOCUMENT_TOKEN_TO_BE_REPLACED

This feature require that you enable JavaScript in your browser.
END_OF_DOCUMENT_TOKEN_TO_BE_REPLACED