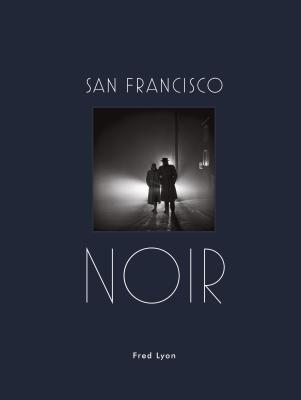 Following in the footsteps of classic films like The Maltese Falcon and The Lady from Shanghai, veteran photographer Fred Lyon creates images of San Francisco in high contrast with a sense of mystery. In this latest offering from the photographer of San Francisco: Portrait of a City 1940–1960, Lyon presents a darker tone, exploring the hidden corners of his native city. Images taken in the foggy night are illuminated only by neon signs, classic car headlights, apartment windows, or streetlights. Sharply dressed couples stroll out for evening shows, drivers travel down steep hills, and sailors work through the night at the old Fisherman's Wharf. Stylistically, many of the photographs are experimental the noir tone is enhanced by double exposures, elements of collage, and blurred motion. These strikingly evocative duotone images expose a view of San Francisco as only Fred Lyon could capture.

Fred Lyon studied under famed photographer Ansel Adams and has been called "San Francisco's Brassai." A lifelong resident of San Francisco, he has contributed to numerous fashion, home, and garden magazines. His work has been exhibited in San Francisco at the Museum of Modern Art, the Legion of Honor Museum, and the Leica Gallery, as well as the Art Institute of Chicago, and was the subject of a Life magazine retrospective.

"Those under San Francisco's spell become enthralled by its dynamic light and character: sparkling, or fog shrouded, or shadowy and mysterious, depending on time and season. Photographer Lyon is no outsider to the city. He is a fourth-generation San Franciscan and has photographed it for decades, obsessively roaming its vertiginous streets. Most of these velvety black-and-white images were taken in the 1940s and 1950s, a lost era of pillbox hats, fedoras, neon signs, stevedores, and a real fishermen's wharf. In addition to the exteriors, Lyon made vivid, up-close portraits of jazz musicians in live performance at classic long-gone venues such as Basin Street West and the Black Hawk... the glossy paper, attractive printing, and black cloth-bound cover with silver lettering make an attractive package. A brief introduction by journalist and author Ernest Beyl describes Lyon's lifelong passion for his native city. VERDICT A wonderful browse that invites armchair time travelers to experience a bygone era."
- Library Journal

"Fred Lyon captured misty, melancholy San Francisco over a period of 75 years, and the results are absolutely captivating. [...] The beautiful photo-book, which is bound in sumptuous dark blue cloth, comprises Lyon's photographs of the hilly city taken over 75 years..Each photograph in San Francisco Noir boasts a singular allure, and a distinct ability to transport the viewer to Lyon's city's bygone era - a brand of gloomy-yet-delightful escapism that is a most enjoyable way to start off a mundane week."
- AnOther Magazine

"Before San Francisco was synonymous with tech money and progressive politics, there were other versions of the city. The version that Fred Lyon celebrates in his new book is a classic-San Francisco full of smoky jazz clubs, neon lights in the fog and sharply dressed men and women stepping on and off of trolley cars. Made mostly during the 1950s and '60s, Lyon's images are big on atmosphere and style, and hit many parts of the city that visitors love."
- Photo District News

"No photographer has better captured the allure of San Francisco in all its foggy, cinematic splendor than Lyon, the fourth-generation San Franciscan who is now 93. His latest book assembles 200 black-and-white images of what is largely a lost world of jazz clubs, seedy streets and everyday working-class life."
- San Francisco Chronicle

This feature require that you enable JavaScript in your browser.
END_OF_DOCUMENT_TOKEN_TO_BE_REPLACED

This feature require that you enable JavaScript in your browser.
END_OF_DOCUMENT_TOKEN_TO_BE_REPLACED