The Opposite of Hate: A Field Guide to Repairing Our Humanity (Hardcover) 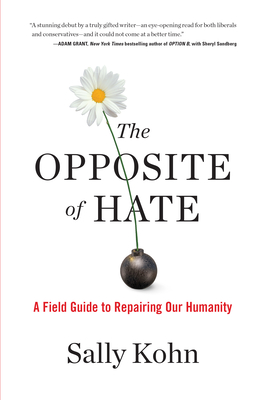 “A stunning debut by a truly gifted writer—an eye-opening read for both liberals and conservatives—and it could not come at a better time.”—Adam Grant, New York Times bestselling author of Option B, with Sheryl Sandberg

What is the opposite of hate?

As a progressive commentator on Fox News and now CNN, Sally Kohn has made a career out of bridging intractable political differences and learning how to talk respectfully with people whose views she disagrees with passionately. Her viral TED Talk on the need to practice emotional—rather than political—correctness sparked a new way of considering how often we amplify our differences and diminish our connections.

But these days even famously “nice” Kohn finds herself wanting to breathe fire at her enemies. It was time, she decided, to look into the epidemic of hate all around us and learn how we can stop it. In The Opposite of Hate, Kohn talks to leading scientists and researchers and investigates the evolutionary and cultural roots of hate and how incivility can be a gateway to much worse. She travels to Rwanda, the Middle East, and across the United States, introducing us to former terrorists and white supremacists, and even some of her own Twitter trolls, drawing surprising lessons from dramatic and inspiring stories of those who left hate behind.

Sally Kohn’s engaging, fascinating, and often funny book will open your eyes and your heart.

Sally Kohn is one of the leading progressive voices in America today. A CNN political commentatorandcolumnist, she was previously a Fox News contributor, and before that worked for over fifteen years as a community organizer. Kohn's writing has appeared in the Washington Post,the New York Times,RollingStone.com, Elle.com, USA Today, Time, and many other outlets. She is also a popular keynote speaker and frequently leads media and speaking-skills workshops for grassroots activists and corporate leaders. Kohn lives in Brooklyn with her partner, Sarah Hansen, and their daughter, Willa.

“Kohn is funny and warm as she shares the best ways to shift the hate and dissolve the barriers between those of us with divergent views.”
—Esquire

“A holistic guide toward building a world where we are all greater than fear and more powerful than anger.”
—Ms.

“Whether she’s visiting reconciliation villages in Rwanda or recounting her own surprisingly productive interactions with abusive Twitter trolls, Kohn is a thoughtful, empathetic reporter whose insights aren’t just timely – they feel necessary to our survival.”
—Apple Books

“A stunning debut by a truly gifted writer—an eye-opening read for both liberals and conservatives—and it could not come at a better time.”
—Adam Grant, New York Times bestselling author of Option B, with Sheryl Sandberg

“A must-read book for all of us at this moment in history. I’m grateful for Sally Kohn’s clear voice and vision in showing us the way forward.”
—Elizabeth Gilbert

“Sick of the anger, division and hate in our world? Sally Kohn’s book is uplifting, funny, and full of inspiring solutions.”
—Van Jones, host of The Van Jones Show and New York Times bestselling author of Beyond the Messy Truth

“Sally and I agree on very little politically, but somehow in spite of that, we have navigated a friendship that transcends everything else. This book explains it all!”
—Sean Hannity

“A testament to the power of understanding others deeply, the book reminds us that even those we disagree with vehemently have a perspective and orientation in the world that we can learn from as we work to make the world better.”
—DeRay Mckesson, social activist and host of Pod Save the People

“[Kohn's] passionate appeal for empathy provides a proactive springboard for readers who find themselves unable to comprehend the xenophobia and lack of civility in others. An uplifting and inspiring plea to promote peace, kindness, and humanitarianism in the face of hate.”
—Kirkus Reviews

This feature require that you enable JavaScript in your browser.
END_OF_DOCUMENT_TOKEN_TO_BE_REPLACED

This feature require that you enable JavaScript in your browser.
END_OF_DOCUMENT_TOKEN_TO_BE_REPLACED