What Has the Government Done to Our Money? [Reprint of First Edition] (Paperback) 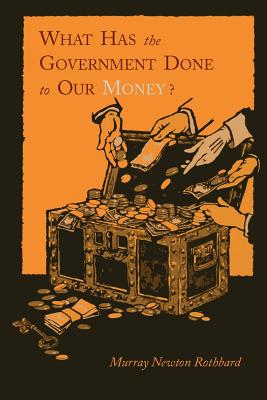 2011 Reprint of 1963 Edition. Full facsimile of the original edition, not reproduced with Optical Recognition Software. Murray Newton Rothbard (1926 - 1995) was an American author and economist of the Austrian School who helped define capitalist libertarianism and popularized a form of free-market anarchism he termed "anarcho-capitalism." Rothbard wrote over twenty books and is considered a centrally important figure in the American libertarian movement. Building on the Austrian School's concept of spontaneous order, support for a free market in money production and condemnation of central planning, Rothbard advocated abolition of coercive government control of society and the economy. He considered the monopoly force of government the greatest danger to liberty and the long-term well-being of the populace, labeling the State as nothing but a "gang of thieves writ large"-the locus of the most immoral, grasping and unscrupulous individuals in any society. Rothbard concluded that all services provided by monopoly governments could be provided more efficiently by the private sector.

This feature require that you enable JavaScript in your browser.
END_OF_DOCUMENT_TOKEN_TO_BE_REPLACED

This feature require that you enable JavaScript in your browser.
END_OF_DOCUMENT_TOKEN_TO_BE_REPLACED