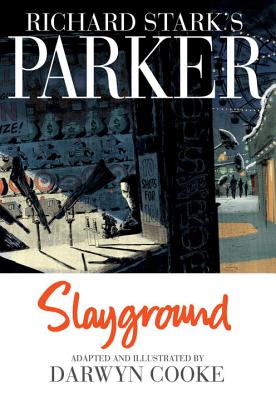 Parker, whose getaway car crashes after a heist, manages to elude capture with his loot by breaking into an amusement park that is closed for the winter. But his presence does not go unnoticed — a pair of cops observed the job and its aftermath. But rather than pursue their suspect… they decide to go into business for themselves, with the help of some "business associates." From then on it's a game of cat and mouse, one played out through closed rides of the abandoned carnival… a game that slowly starts to favor the mouse.

Winner of the 2014 Eisner Awards for Best Adaptation from Another Medium and Best Lettering, and includes the Eisner Award-winning short story "The Seventh," previously only available in the Martini Edition!

Darwyn Cooke, Eisner-Award winning creator of DC: The New Frontier, continues adapting Richard Stark's genre-defining Parker novels with his signature pulp flair in this final installment. A hard-nosed thief, Parker is Richard Stark's most famous creation, and Stark, in turn, is the most famous pen name of Mystery Writers of America Grand Master Donald E. Westlake. If Cooke's previous Parker adaptations are any indicaton, we'd best to buckle up.

Richard Stark is the most famous pseudonym of world-renowned author Donald Westlake (1933-2008). In 1962 hecreated the master thief Parker and began a series of novels that have been recognized as seminal works of crime fiction. Several of Westlake’s books have been adapted by Hollywood and Westlake’s adaptation of The Grifters earned him an Academy Award nomination for best motion picture screenplay. Westlake has won numerous awards for his fiction and in 1993 the Mystery Writers of America named him a Grand Master, the highest honor bestowed by that prestigious society.

Darwyn Cooke (1962-2015) was a graphic designer and animator who turned his attention toward cartooning in the late nineties. Known primarily for his work on the DC line of superheroes, Cooke always had an affinity for crime fiction and has often cited the Parker books as a great source of creative inspiration. Cooke has won multiple Eisner, Harvey, and Shuster awards, as well as the National Cartoonist Society’s Best Series award. In 2008 Cooke was Emmy-nominated for the animated adaptation of his magnum opus, DC: The New Frontier.

“Cooke’s feel for the character and action matches the best seen in the world of graphic novels.” –Mark Squirek, New York Journal of Books

"Parker is probably one of the most undervalued characters in crime literature and comic book artist/writer Darwyn Cooke is just the guy to bring this amazing character into the spotlight for a new audience." –Pop Mythology

This feature require that you enable JavaScript in your browser.
END_OF_DOCUMENT_TOKEN_TO_BE_REPLACED

This feature require that you enable JavaScript in your browser.
END_OF_DOCUMENT_TOKEN_TO_BE_REPLACED