Tangy Tart Hot and Sweet: A World of Recipes for Every Day (Hardcover) 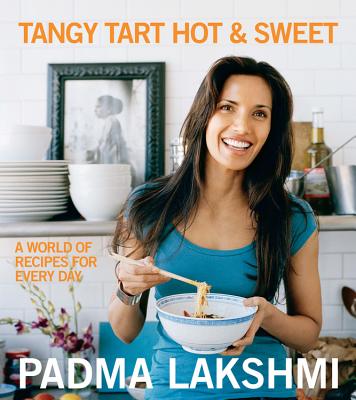 Recipes from around the world from the host of Bravo's Top Chef and Hulu's Taste the Nation.

Award-winning author Padma Lakshmi returns to the page with recipes for sophisticated international cuisine that are simple to prepare. Inspired by her travels to some of the most secluded corners of the planet, Padma shares the origins and secrets of her latest recipes -- but you don't need to travel the world in order to prepare them. Padma makes it easy to impress your guests with elegant savory and sweet dishes such as Keralan Crab Cakes, Mexican Macaroni and Cheese, Krispy Fried Chicken, BBQ Korean Short Ribs, and Chocolate Amaretto Ice Cream. Padma reinvents familiar dishes by introducing a host of flavors and spices, transforming the everyday kitchen into a global one.
Tangy Tart Hot & Sweet is both a culinary and personal scrapbook of Padma's life, highlighted by dazzling photography and evocative personal essays about her lifelong connection to food and cooking. From appetizers to entrees, soups to desserts, Tangy Tart Hot & Sweet is perfect for anyone who wants cooking to be easy, elegant, and unforgettable.

Padma Lakshmi is internationally known as a food expert, model, actress and New York Times bestselling author, as well as the recipient of Variety's Karma Award and the NECO Ellis Island Medal of Honor. Lakshmi serves as host and executive producer of Bravo's Emmy-winning series Top Chef, as well as host and executive producer of Hulu's Taste the Nation.

Lakshmi established herself as a food expert early in her career, having hosted two successful cooking shows and writing the bestselling Easy Exotic, which won the "Best First Book" award at the 1999 Gourmand World Cookbook Awards. Lakshmi followed this success with the publication of her second cookbook, Tangy Tart Hot & Sweet. In 2016, she released her food memoir, the New York Times bestselling Love, Loss, and What We Ate, which won "Best Lifestyle, Body & Soul" at the 2017 Gourmand World Cookbook Awards, followed by The Encyclopedia of Spices & Herbs. She is set to publish her first children's book, Tomatoes for Neela, in Fall 2021.

In addition to being named a visiting scholar at MIT, she serves as an artist ambassador for the ACLU, focusing on immigrants' rights and women's rights, and was recently appointed as a Goodwill Ambassador for the UN Development Program. She is the co-founder of the Endometriosis Foundation of America. She lives in New York City with her daughter.

"The title says it all...the perfect 'melting pot' cookbook. Every recipe, from the simple to the exotic, will take you on a delicious culinary journey around the world."
—Tom Colicchio, Chef/Owner Craft Restaurants

"Tangy allows Padma to share with us her rich cooking and eating experience. Padma has created exciting and unexpected wonderful recipes mostly inspired by her Indian heritage but with very original and personal twists. It's smart fusion at its best."
—Eric Ripert, Executive Chef/Co-Owner Le Bernardin

"Padma's food is a real treat to eat. She cooks in a very relaxed way-she's someone who loves food and has got an instinct for how everything goes together."—Nigella Lawson

"[Padma's] new book...imbued with her personality, is beautiful to look at, international in flavors, very New World in its Lobster Bruschetta and also very Old World in its south Indian Green Mango Curry. A joyful book both to read and to cook from."—Madhur Jaffrey

This feature require that you enable JavaScript in your browser.
END_OF_DOCUMENT_TOKEN_TO_BE_REPLACED

This feature require that you enable JavaScript in your browser.
END_OF_DOCUMENT_TOKEN_TO_BE_REPLACED