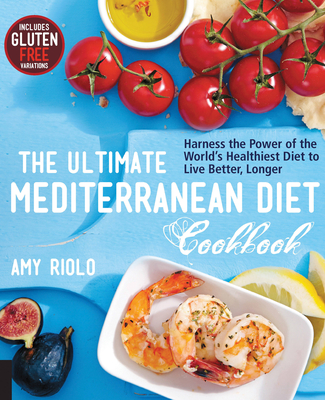 More than a mix of rich history, gorgeous beaches, and warm blue waters, the countries along the Mediterranean Sea and their people have a history of living longer and healthier lives and you can too! By simply following a Mediterranean diet rich in olive oil, nuts, beans, fish, fruits and vegetables, even drinking wine with meals, you can prevent diseases and prolong your life.

The Ultimate Mediterranean Diet Cookbook is the only book needed to unleash the power of one of the world's healthiest diets. It integrates the latest research and clinical findings with 100 delicious, authentic, easy recipes and Mediterranean lifestyle tips while dispelling any myths and misinformation.

The Ultimate Mediterranean Diet Cookbook features recipes from all countries in the region to include perennial favorites, little known treasures, and recent discoveries.

Get ready to enjoy a healthy lifestyle that includes enticing, satisfying, recipes- great for family dinners and entertaining, for any and all occasions, to be appreciated by any palate.

"Amy Riolo is a true guardian of the techniques and inherent goodness of the Mediterranean life style! Her food, her philosophy is an absolute pleasure to read and consume." - Chef Jason Roberts www.chefjasonroberts.com

As an award - winning author, chef, television personality, cuisine and culture expert, and educator, Amy Riolo makes frequent appearances on numerous television and radio programs both in the United States and abroad.

Amy, an Italian American of Calabrian descent, also created and appeared weekly in ninety second cooking videos entitled "Culture of Cuisine" which air onnationally syndicated news shows on 28 different channels across the United States, totaling a reach of over 300 million people. Amy's recent book, The Mediterranean Diabetes Cookbook, (American Diabetes Association) was released in March 2010, received a starred PW review, won the 2011 Nautilus Book Award and was named "Best. Diabetes. Cookbook. Ever. " by DiabetesMine.com. Her second book Nile Style; Egyptian Cuisine and Culture (Hippocrene Books) won the World Gourmand Award for "Best Arab Cuisine Book" in the United States and was just released in a second edition. Her first book, Arabian Delights; Recipes & Princely Entertaining Ideas from the Arabian Peninsula was chosen as one of the "16 Volumes Worth Staining" by the Washington Post (Capital Books, 2007). Amy also contributed to The Food Cultures of the World Encyclopedia and co-wrote The Al Tiramisu Restaurant Cookbook: An Elevated Approach to Authentic Italian Cuisine with award-winning chef/restaurateur Luigi Diotaiuti. She is currently completing The Ultimate Mediterranean Diet Cookbook which will be released in April 2015 and The Italian Diabetes Cookbook which will be released in January 2017.

Amy is a Culinary Advisor for The Mediterranean Food Alliance. Her work has appeared in numerous print media including USA Today, Cooking Light magazine,The Washington Post, CNN.com, The Wall Street Journal, Gulf News, Popular Anthropology Magazine, The UAE National, andinternational newspapers and hundreds of blogs. She is also the author of a noted culinary/cultural blog calledAmyriolo.blogspot.com.

"Rating:5 stars. The recipes in this cookbook were chosen because of their taste, authenticity, and nutritional value. They are not only low in fat, cholesterol, and sodium; they are packed with vitamins, minerals, and healthful properties that our bodies need...The Ultimate Mediterranean Diet Cookbook will help you live better, longer." - Examiner.com

"Chef Amy's passion and wisdom about the Mediterranean lifestyle and diet, allows the reader to transcend the level of a cookbook and inspires them to create food prescriptions that can heal, modify and even reverse many modern day disease states. This manual for wisdom based eating should be on everyone's kitchen counter." - John R Principe, MD Creator and Founder of WellBeingMD, LTD

"Combining her passion and talent as a chef with the medical insights of a doctor, Amy Riolo's The Ultimate Mediterranean Diet Cookbook entices gourmands and nutritionists alike with authentic recipes that are easy to create and beautiful memoir that is a delight to read." - Luigi Diotiaiuti, Chef/Owner Al Tiramisu Restaurant, Author, Sommelier

"Amy Riolo has created an authentic yet accessible guide to eating the Mediterranean Diet as it is meant to be eaten. This book captures the Mediterranean essence with delicious recipes from a cuisine that is accessible, flavorful and nutritionally sound." - Lidia Bastianich - LidiasItaly.com

This feature require that you enable JavaScript in your browser.
END_OF_DOCUMENT_TOKEN_TO_BE_REPLACED

This feature require that you enable JavaScript in your browser.
END_OF_DOCUMENT_TOKEN_TO_BE_REPLACED