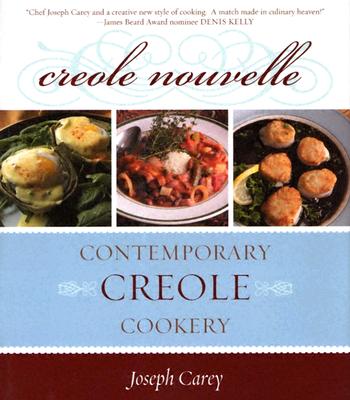 By Joseph Carey
Email or call for price
Special Order

Traditional New Orleans restaurants, such as Galatoire's, Commander's Palace, Delmonico's, and Arnaud's, advocates of old ways, are attracting first-timers and tourists. Conversely, Gourmet magazine, AAA, and other top fine dining publications consistently award cutting-edge restaurants such as Bayona and Peristyle with top honors because of the trendy cuisines they have brought to New Orleans and the area. Just as Jeremiah Tower and Deborah Madison redefined San Francisco cuisine in the '70s and the Gang of Five revolutionized Southwestern eating in the '80s, Susan Spicer, John Harris, Anne Kearney, Peter Vazquez, and Donald Link are redefining the Creole standard today. In homage to these fresh ideas, Creole Nouvelle features the New Orleans chefs who use local produce and seafood and bring in the best artisanal cheeses, meats, and wines from around the nation and the world. Creole Nouvelle redefines traditional recipes of the genre while offering wonderful dishes from today's top chefs. This book is truly a new take on a classic cuisine that will have both the novice cook and seasoned gourmand salivating.

Chef Joseph Carey was born in New Orleans. He worked in restaurants while attending college at Louisiana State University and Indiana University. He has a degree in English literature from the latter. Carey worked as an executive chef in San Francisco for 16 years, where he opened five restaurants. He then left to establish the Memphis Culinary Academy, and in Memphis, he opened three distinguished restaurants. He was Memphis' first Certified Executive Chef. Four times a year, he teaches his ten-week Professional Class to students who wish to become professional chefs. The local chapter of the American Culinary Federation elected Chef Carey to the president of the association twice, and to be vice-president once. In addition to his cooking talents, he is sought after for other culinary expertise: Chef Carey designed the kitchen for the restaurant in the Brooks Museum of Art in Memphis. He has done three local television series. The local ABC affiliate, WHBQ hired him for an evening news spot called A Taste of Memphis; for three years, he was a regular with his cooking tips on the noon news on the local CBS affiliate, WREG, and for many years, Chef Carey did a half hour show on local Cablevision called The American Epicure. He has been interviewed on television in singular appearances, as well.When national celebrities such as Tom Cruise and Debbie Rose come to Memphis, Chef Carey is consulted on a regular basis for recommendations for personal chefs, and in fact, has provided chefs trained by himself to such well-known people as Dixie Carter, Annie Potts and Hal Holbrook. He has trained cooks to cater for the artist formerly known as Prince and George Thoroughgood. He has cooked for the Egyptian and Irish ambassadors to the United States.

This feature require that you enable JavaScript in your browser.
END_OF_DOCUMENT_TOKEN_TO_BE_REPLACED

This feature require that you enable JavaScript in your browser.
END_OF_DOCUMENT_TOKEN_TO_BE_REPLACED