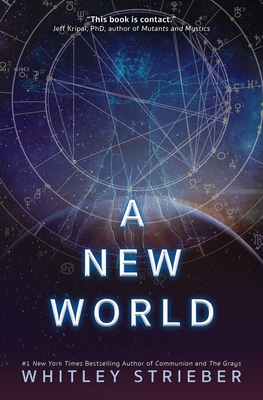 In September of 2015 the visitors in Whitley Strieber's immortal bestseller Communion returned to his life. A New World details their powerful message: A new world is coming…if we can take it.

In 2018, the US Navy admitted that videos taken off the carrier Nimitz by pilots using ultra-sophisticated cameras were of unknown objects with incredible flight characteristics. Add to this the past seventy years of UFO evidence, and it is now undeniable that something unknown is flying around in our skies. But why are they here?

There are millions of close encounter witnesses who would say that they are here for us, and have already been in contact with us for two generations, while the official world and the media have been in denial.

In 1987, author Whitley Strieber published Communion about his own close encounter. It was met with brutal skepticism…but not from other close encounter witnesses, who wrote him in the hundreds of thousands, telling of their own experiences. With these overwhelming accounts of alien encounters, Rice University in Houston, Texas, has archived these letters as a testimony that we are not alone.

After thirty-three years of having them in his life, and an entirely new group of encounters starting in 2015, Whitley Strieber returns with a new vision of contact that will shatter all of our previous theories and beliefs and reveal the experience for what it is: the strangest, most powerful, and potentially most important thing that has ever happened to mankind.

Whitley Strieber is the author of over forty works of both fiction and nonfiction. His books The Wolfen, The Hunger, Communion, and The Coming Global Superstorm (as The Day After Tomorrow) were all made into feature films. His sci-fi series Alien Hunter became the SyFy Channel series Hunters.

In 1985, Whitley had a close encounter of the third kind. It led to the writing of the epic bestseller Communion that changed the way the world thinks about this enigmatic experience. When he eventually realized that the experience could not be attributed to known factors, he began making an effort to recontact what he calls “the visitors.” The response has been ongoing for the past thirty years, and has been chronicled in Communion, Transformation, Majestic, and now A New World. Many people have encountered the visitors with Whitley, placing it among the most witnessed paranormal events in history.

His website, unknowncountry.com, is among the largest in the world dealing with paranormal phenomena and his podcast, Dreamland, has been produced weekly for twenty years.

“Whitley Strieber’s magical books about his encounters with the uncanny have captured my imagination since childhood. A New World finds the master in top form, from a stirring and ultra high strangeness experience at Wounded Knee to grand speculations about consciousness, communion, and the future of humanity. A fascinating, mysterious book.”
— Josh Boone, director of "The Fault in Our Stars"

“Provocative and riveting. I couldn’t put it down. Strieber confronts the mystery of close encounter with fresh insight and depth, wrapping up his years of interaction with the phenomenon he calls ‘the visitors.’ Now there is more urgency for contact than ever before, and this book explains how that might happen.”
— Leslie Kean, investigative reporter and author of "Surviving Death: A Journalist Investigates Evidence for an Afterlife"

“Mr. Strieber writes with the precious sanity of an intuitive savant. In describing so clearly true experiences that baffle most of us, he opens our minds to accept with grace meanings we need to learn are very real.”
— Christopher Green, MD, PhD

“I entered Whitley Strieber’s A New World and couldn’t put it down. Humankind has always wondered what extraterrestrial life would look like, be like, act like. The ‘visitors’ of A New World are unlike anything we have conceived, in other words, they are truly alien. Enter this risky new world and leave warned…and empowered.”
— Diana Walsh Pasulka, chair, department of philosophy and religion, University of North Carolina, Wilmington, author of "American Cosmic"

This feature require that you enable JavaScript in your browser.
END_OF_DOCUMENT_TOKEN_TO_BE_REPLACED

This feature require that you enable JavaScript in your browser.
END_OF_DOCUMENT_TOKEN_TO_BE_REPLACED