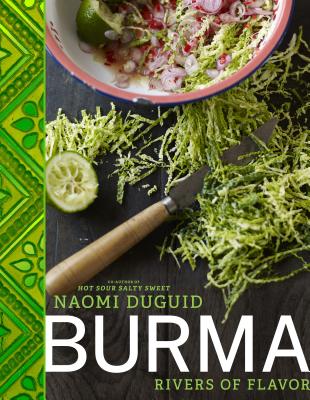 Naomi Duguid’s heralded cookbooks have always transcended the category to become “something larger and more important” (Los Angeles Times). Each in its own way is “a breakthrough book . . . a major contribution” (The New York Times). And as Burma opens up after a half century of seclusion, who better than Duguid—the esteemed author of Hot Sour Salty Sweet—to introduce the country and its food and flavors to the West.

Located at the crossroads between China, India, and the nations of Southeast Asia, Burma has long been a land that absorbed outside influences into its everyday life, from the Buddhist religion to foodstuffs like the potato. In the process, the people of the country now known as Myanmar have developed a rich, complex cuisine that mekes inventive use of easily available ingredients to create exciting flavor combinations.

Salads are one of the best entry points into the glories of this cuisine, with sparkling flavors—crispy fried shallots, a squeeze of fresh lime juice, a dash of garlic oil, a pinch of turmeric, some crunchy roast peanuts—balanced with a light hand. The salad tradition is flexible; Burmese cooks transform all kinds of foods into salads, from chicken and roasted eggplant to spinach and tomato. And the enticing Tea-Leaf Salad is a signature dish in central Burma and in the eastern hills that are home to the Shan people.

Mohinga, a delicious blend of rice noodles and fish broth, adds up to comfort food at its best. Wherever you go in Burma, you get a slightly different version because, as Duguid explains, each region layers its own touches into the dish.

Tasty sauces, chutneys, and relishes—essential elements of Burmese cuisine—will become mainstays in your kitchen, as will a chicken roasted with potatoes, turmeric, and lemongrass; a seafood noodle stir-fry with shrimp and mussels; Shan khaut swei, an astonishing noodle dish made with pea tendrils and pork; a hearty chicken-rice soup seasoned with ginger and soy sauce; and a breathtakingly simple dessert composed of just  sticky rice, coconut, and palm sugar.

Interspersed throughout the 125 recipes are intriguing tales from the author’s many trips to this fascinating but little-known land. One such captivating essay shows how Burmese women adorn themselves with thanaka, a white paste used to protect and decorate the skin. Buddhism is a central fact of Burmese life: we meet barefoot monks on their morning quest for alms, as well as nuns with shaved heads; and Duguid takes us on tours of Shwedagon, the amazingly grand temple complex on a hill in Rangoon, the former capital. She takes boats up Burma’s huge rivers, highways to places inaccessible by road; spends time in village markets and home kitchens; and takes us to the farthest reaches of the country, along the way introducing us to the fascinating people she encounters on her travels.

The best way to learn about an unfamiliar culture is through its food, and in Burma: Rivers of Flavor, readers will be transfixed by the splendors of an ancient and wonderful country, untouched by the outside world for generations, whose simple recipes delight and satisfy and whose people are among the most gracious on earth.

Naomi Duguid is a writer, photographer, teacher, cook, and world traveler. Her most recent cookbooks, Burma and Taste of Persia, transported readers into cultures and flavors not yet celebrated in the West, and respectively won the 2013 IACP Cookbook Award for Culinary Travel and both the 2017 IACP Cookbook Award for Culinary Travel and the 2017 James Beard Award for Best Book of the Year, International. Her previous award-winning titles, coauthored with Jeffrey Alford, include Flatbreads & Flavors: A Baker’s Atlas, their first book, which won a James Beard Award for Cookbook of the Year; Seductions of Rice; Hot Sour Salty Sweet, also a James Beard Cookbook of the Year; Mangoes & Curry Leaves; and Beyond the Great Wall.

Duguid’s articles and photographs have appeared regularly in Lucky Peach, Food & Wine, and other publications. She is a frequent guest speaker and presenter at food conferences. She is the host of Toronto’s Food on Film series and has a strong online presence (Twitter and Facebook). Her stock photo agency, Asia Access, is based in Toronto, where she lives when she is not on the road.

“Duguid is part anthropologist, part brilliant cook, and her recipes simply work in American kitchens. Many dishes in Burma will seem entirely fresh to palates already familiar with Thai or Vietnamese food. . . . Duguid has mastered the arc of flavor development. She writes with deep, local, friendly authority.”
—Cooking Light

“This stunning book is part cookbook, part culinary anthropology, and, throughout, a feast for the eyes."
—Celebrated Living

“A treasury of Burma’s cuisine . . . . Duguid’s portrait of Burma’s rich food heritage contains vivid glimpses of the people who create it along with cultural insight and a dash of travel advice.”
—Publishers Weekly, starred review (Burma is one of Publishers Weekly's Top 10 Cookbooks for Fall)

This feature require that you enable JavaScript in your browser.
END_OF_DOCUMENT_TOKEN_TO_BE_REPLACED

This feature require that you enable JavaScript in your browser.
END_OF_DOCUMENT_TOKEN_TO_BE_REPLACED