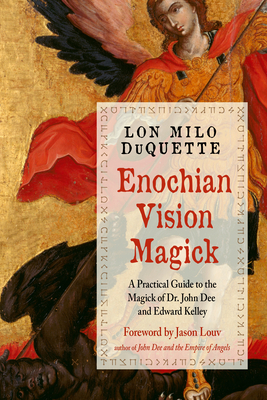 Having mastered the arts and sciences of his age, Elizabethan magus Dr. John Dee (1527–1608) resolved that worldly knowledge could no longer provide him the wisdom he desired, and as did so many other learned men of the day, he turned his attention to magick. In 1582 he and his clairvoyant partner Edward Kelley made magical contact with a number of spiritual entities who identified themselves as angels—the same that communicated with Enoch and the patriarchs of the Old Testament. Over the next 3 years they revealed to Dee and Kelley three distinct magical systems of vision magick. The third and last of these incorporated a series of “calls” to be recited in an angelic language in order to raise the consciousness of the magician to a level where angelic contact is possible.

In Enochian Vision Magick, Lon Milo DuQuette introduces the origins of Enochian magick and offers the expert and novice alike the opportunity not only to see the big picture of the full system but also the practical means by which he or she can become attuned in the same step-by-step manner that first prepared Dee and Kelley.

First published by Weiser in 2008, this new edition includes a new introduction and new back matter by the author as well as a new foreword by Jason Louv.

Lon Milo DuQuette is a bestselling author who lectures worldwide on such topics as magick, tarot, and the Western Mystery Traditions. He is currently the US Deputy Grand Master of Ordo Templi Orientis and is on the faculty of the Omega Institute in Rhinebeck, N.Y. and the Maybe Logic Academy. Visit him at londuquette.com.

Jason Louv is a New Yorkbased writer and editor. He has spent the last six years researching and practicing magic, being initiated into various questionable secret societies, traveling around the Near East, and learning how to cloud minds. This is his first book.

This feature require that you enable JavaScript in your browser.
END_OF_DOCUMENT_TOKEN_TO_BE_REPLACED

This feature require that you enable JavaScript in your browser.
END_OF_DOCUMENT_TOKEN_TO_BE_REPLACED