Enochian Vision Magick: An Introduction and Practical Guide to the Magick of Mr. John Dee and Edward Kelley (Paperback) 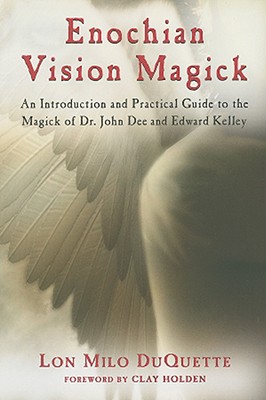 By Lon Milo DuQuette , Clay Holden (Foreword by)
Email or call for price
Hard to Find

Dr. John Dee (1527-1608) was one of the greatest minds of the Elizabethan Age, and his system of angelic communication was the result of the most dramatic magical operation ever recorded. It has survived to become the cornerstone of the modern ceremonial magician's practice. In 1582 Dee and his clairvoyant partner Edward Kelley made magical contact with a number of spiritual entities who identified themselves as angels -- the same that communicated with Adam, Enoch, and the patriarchs of the Old Testament. Over the next three years they revealed to Dee and Kelley three distinct magical systems of vision magick. The third and last of these incorporated a series of "calls" to be recited in an angelic language in order to raise the consciousness of the magician to a level where angelic contact is possible. Bestselling author and magician, Lon Milo DuQuette, who has practiced Dee's system for over twentyfive years, has seized upon elements of the original Dee material overlooked by adepts of the Golden Dawn, Aleister Crowley, and other modern magicians, and brought them to light in Enochian Vision Magick. DuQuette offers the expert and novice alike the practical means by which they can become attuned in the same simple step-by-step manner that first prepared Dee and Kelley. There has never been a book on Enochian magick like this one.

Lon Milo DuQuette is a bestselling author who lectures worldwide on such topics as magick, tarot, and the Western Mystery Traditions. He is currently the US Deputy Grand Master of Ordo Templi Orientis and is on the faculty of the Omega Institute in Rhinebeck, N.Y. and the Maybe Logic Academy. Visit him at londuquette.com.

This feature require that you enable JavaScript in your browser.
END_OF_DOCUMENT_TOKEN_TO_BE_REPLACED

This feature require that you enable JavaScript in your browser.
END_OF_DOCUMENT_TOKEN_TO_BE_REPLACED