The Richest Man in Babylon: with The Magic Story (Paperback) 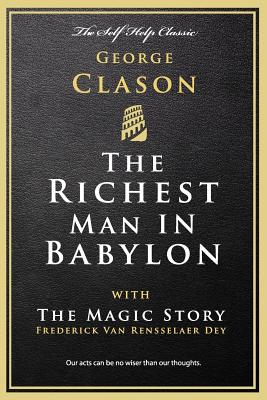 In short, The Richest Man in Babylon is a series of the most powerful financial parables ever written. These stories are set in ancient Babylon and relate the story of a Babylonian slave who uses the secrets of the book to become man of great wealth. Each story has a concrete point that becomes apparent from reading and digesting the message. These points are basic tenets of how to become successful in business. This book is perfect if you learn by reading the experiences of others. The entire book is told in a story-like format, so it often goes down much like reading a collection of short stories. The lessons and principles in The Richest Man In Babylon are pretty simple and to the point. The book consists of different stories back in the Babylonian days. The Richest Man in Babylon documented everything he had learned and his progress on clay tablets, which were later found in the 1930's by archaeologists and professors at a university. These professors had then learned of these principles and applied them to their own lives, to also become wealthy and financially abundant.

George Samuel Clason was a soldier, businessman and writer, today best known for his success classic The Richest Man in Babylon. Long ago, Babylon was the richest city in the world, with lavish houses, palaces and huge city walls; the Babylonians used irrigation to create fertile farmland where once there had been desert. But, according to Clason, Babylon was also the cradle of modern finance: money as the means of exchange and all forms of lending and borrowing were all highly developed. Its inhabitants were allowed to make money freely, and the prosperity of the city continued for centuries. That's why Clason chose to place his short stories in Babylon. Through his pamphlets he wanted to demonstrate the unchanging principles of finance and wealth-building. The message he sends is that saving, investing and financial propriety are equally as important as setting goals, a strong work ethic, and an optimistic attitude.

This feature require that you enable JavaScript in your browser.
END_OF_DOCUMENT_TOKEN_TO_BE_REPLACED

This feature require that you enable JavaScript in your browser.
END_OF_DOCUMENT_TOKEN_TO_BE_REPLACED