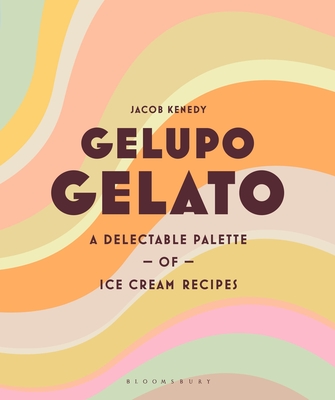 WITH KISSES FROM ITALY

A frosty masterclass in the simple art of gelato...

And that's not all! There are definitive recipes for a classic granita (like grown-up slushie), barely-melting semifreddo, ice cream cake, profiteroles, ice cream cones and brioche buns – as well as the only chocolate sauce you'll ever need and a tip sheet for pairing flavours.

"Once you've had one, you'll want them all" Evening Standard

This is the moment when gelato becomes your cold, sweet new Italian obsession.

Jacob Kenedy was born in London in 1980 and continues to live there today. When he graduated from St John's, Cambridge, he was already a chef at Moro in London, and he continued to flit between the kitchens there and those at Boulevard in San Francisco, until taking a year out to travel round Italy. There he ate a great deal, and learned to make gelato at Gelatauro.

He opened Bocca di Lupo in a hidden backstreet in Soho's underbelly in 2008, and it has since been twice named London's best restaurant. In 2010 he opened Gelupo, a gelateria and delicatessen in the same street. He is the author of Bocca and the co-author of The Geometry of Pasta.

“Some of the best gelato in London” —Vogue

“This is the best gelato in London” —Infatuation

“Once you've had one, you'll want them all” —Evening Standard

“The best gelato outside Rome” —Elle

“With tips, techniques and recipes, this is a celebration of semifreddo, a gala of granita, a fever dream of ice cream.” —GQ Magazine

This feature require that you enable JavaScript in your browser.
END_OF_DOCUMENT_TOKEN_TO_BE_REPLACED

This feature require that you enable JavaScript in your browser.
END_OF_DOCUMENT_TOKEN_TO_BE_REPLACED