Bag of Bones: A Novel (Paperback) 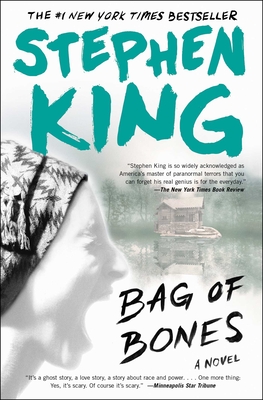 A powerful tale of grief, love’s enduring bonds, and secrets of the past from #1 New York Times bestselling author and master storyteller Stephen King.

Four years after the sudden death of his wife, bestselling novelist Mike Noonan is still grieving. Unable to write and plagued by vivid nightmares set at the western Maine summerhouse he calls “Sara Laughs,” Mike reluctantly returns to the lakeside getaway. There, he finds his beloved Yankee town held in the grip of a powerful millionaire, Max Devore, whose vindictive purpose is to take his three-year-old granddaughter, Kyra, away from her widowed young mother, Mattie. As Mike is drawn into Mattie’s and Kyra’s struggle—and as he falls in love with both of them—he is also drawn into the mystery of Sara Laughs…now the site of ghostly visitations and escalating terrors. What are the forces that have been unleashed here—and just what do they want of Mike Noonan?

"What I admire most about Bag of Bones is its intelligence of voice, not only the craftsmanship -- the indelible sense of place, the well-fleshed characters, the unstoppable story line -- but the witty and obsessive voice of King's powerful imagination. It places both the ghost story and Stephen King in their proper place on the shelf of literary American fiction."—Amy Tan

"Bag of Bones is, hands down, King's most narratively subversive fiction. Whenever you're positive -- just positive! -- you know where this ghost story is heading, that's exactly when it gallops off in some jaw-dropping new direction." —Entertainment Weekly

"This is King at his clever, terrifying best."—Mademoiselle

"Contains some of [King's] best writing...This is King's most romantic book, and ghosts are up and about from the get-go....The big surprise here is the emotional wallop the story packs."— Newsweek

"Stephen King is so widely accepted as America's master of paranormal terrors that you can forget his real genius is for the everyday...This is a book about reanimation: the ghosts', of course, but also Mike's, his desire to re-embrace love and work after a long bereavement that King depicts with an eye for the kind of small but moving details that don't typically distinguish blockbuster horror novels." —The New York Times Book Review

"Bag of Bones proves that King is as seductive a storyteller as ever, pulling readers along as he explores the hidden evils of small-town America." —People

"King has honed his talent into a unique American voice, broader and more ambitious than most of his peers....[Bag of Bones] has depth....It's a ghost story, a love story, a story about race and power...One more thing: Yes, it's scary. Of course it's scary."— Minneapolis Star Tribune

"It may be that after thirty-one novels, Stephen King is just getting started....Bag of Bones may be Stephen King's most ambitious novel ...the effort has inspired a new directness and maturity in his work....Very few writers can convey the passive terrors of nightmares better than King, and he crafts one amazing dream sequence after another."—Atlanta Journal & Constitution

“…King orchestrates the rising tension with the deft touch of a maestro.”—Library Journal

“It’s sometimes hard to tell what’s more threatening: the ghosts that rearrange the magnetic letters on Noonan’s refrigerator or the gossip and domestic violence festering in a rural New England town.  But that’s the genius of King, a master of inserting the 'para' into normal, everyday life.”—Glamour

This feature require that you enable JavaScript in your browser.
END_OF_DOCUMENT_TOKEN_TO_BE_REPLACED

This feature require that you enable JavaScript in your browser.
END_OF_DOCUMENT_TOKEN_TO_BE_REPLACED