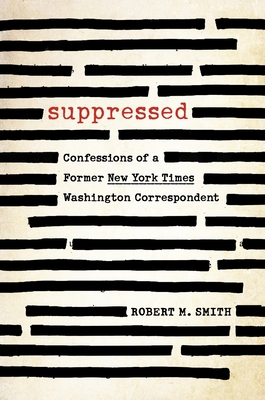 Suppressed is the book the media would prefer you not read. The book may change the way you read a newspaper, listen to the radio, watch TV, or consume digital media. Please look at the Follow the Author Page for videos by Robert M. Smith. Incisive behind-the-scenes details about the Times and other media outlets. -- Publishers Weekly A forthright indictment of the media's shortcomings. -- Kirkus Reviews Half of all Americans do not trust the media, and many Americans believe the media are to blame for the country's division. The U.S. ranks dead last of all countries in media trust. But no one in the media is talking about this. This well-reviewed book tells you why and shows you the inside of the media machine. It includes a look behind the scenes at some of the biggest stories in the history of journalism. The author -- a former New York Times White House and investigative correspondent -- was there and is ruthlessly honest about what he saw. In fact, the author unearthed Watergate before Woodward and Bernstein, but saw the story ignored by the New York Times Washington Bureau when he gave it to them. Margaret Sullivan, media critic for the Washington Post, called the book a "very engaging read." Smith is an attorney and barrister who has written a law book for lawyers. This is a different kind of book, but it is written with the same careful attention to the evidence. Coming to the present, Suppressed shows how some media, including the New York Times, stepped into the ring and began slugging it out with President Trump, instead of staying outside the ring and neutrally reporting what it saw. The book argues that the media would have been more effective if it had remained neutral -- and credible. On the other hand, Times stock dropped 17 percent in the first two quarters of 2021, after President Trump left. During the same time the S&P 500 index rose 18 percent. The book offers entertaining tidbits -- some hard to believe -- but also shows you how to be a knowledgeable consumer of something that you spend time on every day and depend on. Written with candor and humor, Suppressed traces a young investigative reporter's arc from na vet to cynicism, from covering the White House to leaving journalism for Yale Law School and ultimately becoming a barrister in London and teaching at Oxford.

Robert M. Smith is a former New York Times White House and investigative correspondent who was witness to some of the most important stories in modern history, including Watergate, the Pentagon Papers, and the My Lai Massacre. He lives in San Francisco, CA.

This feature require that you enable JavaScript in your browser.
END_OF_DOCUMENT_TOKEN_TO_BE_REPLACED

This feature require that you enable JavaScript in your browser.
END_OF_DOCUMENT_TOKEN_TO_BE_REPLACED