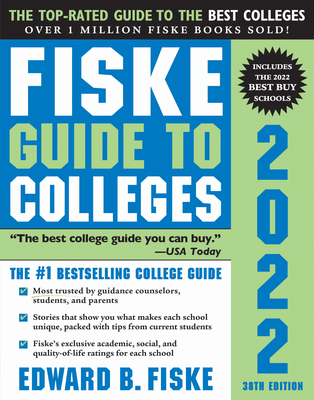 "The best college guide you can buy."—USA Today

Every college and university has a story, and no one tells those stories like former New York Times education editor Edward B. Fiske. That's why, for nearly 40 years, the Fiske Guide to Colleges has been the leading guide to 320+ four-year schools, including quotes from real students and information you won't find on college websites.

Fully updated and expanded every year, Fiske is the most authoritative source of information for college-bound students and their parents. Helpful, honest, and straightforward, the Fiske Guide to Colleges delivers an insider's look at what it's really like to be a student at the "best and most interesting" schools in the United States, plus Canada, Great Britain, and Ireland—so you can find the best fits for you.

In addition to detailed and candid stories on each school, you will find:

Edward B. Fiske is the founder and editor of the Fiske Guide to Colleges. A former Education Editor of the New York Times, Fiske is known around the world for his award-winning writing on topics ranging from trends in American higher education to school reform in Southeast Asia, New Zealand and South Africa.

The guide was established in 1982 when, covering higher education for the Times, Fiske sensed the need for a publication that would help students and parents navigate the increasingly complex college admissions scene. The guide, an annual publication, immediately became a standard part of college admissions literature and it is now the country’s best-selling college guide.

Fiske has teamed up with his wife, Helen F. Ladd, a professor at Duke University, on several major international research projects regarding the development of education in various countries. Together, they are co-editors of the Handbook of Research in Education Finance and Policy, the official handbook of the American Education Finance Association. Fiske’s journalistic travels have taken him to more than 60 countries on behalf of the U.S. Agency for International Development, UNESCO and the Asia Society.

A resident of Chapel Hill, North Carolina, Fiske serves on a number of boards of non-profit organizations working for access to college and international understanding. He is also a founding member of the board of the Central Park School for Children, a charter school in Durham.

This feature require that you enable JavaScript in your browser.
END_OF_DOCUMENT_TOKEN_TO_BE_REPLACED

This feature require that you enable JavaScript in your browser.
END_OF_DOCUMENT_TOKEN_TO_BE_REPLACED