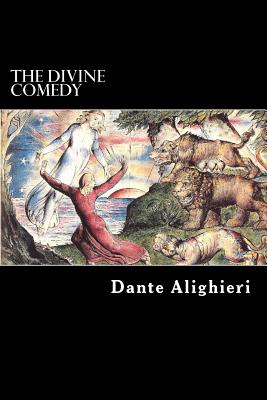 The Divine Comedy is an epic poem written by Dante Alighieri (c1265-1321) between 1308 and his death in 1321. It is widely considered the preeminent work of Italian literature, and is seen as one of the greatest works of world literature.The poem's imaginative and allegorical vision of the afterlife is a culmination of the medieval world-view as it was promulgated under the Western Church. It helped establish the Tuscan dialect, in which it is written, as the standardized Italian language. It is divided into three parts: Inferno, Purgatorio, and Paradiso. In central Italy's political struggle between Guelphs and Ghibellines, Dante was part of the Guelphs, who in general favored the Papacy over the Holy Roman Emperor. Florence's Guelphs split into factions around 1300, the White Guelphs, and the Black Guelphs. Dante was among the White Guelphs who were exiled in 1302 by the Lord-Mayor Cante de' Gabrielli di Gubbio, after troops under Charles of Valois entered the city, at the request of Pope Boniface VIII, who supported the Black Guelphs. This exile, which lasted the rest of Dante's life, shows its influence in many parts of the Comedy, from prophecies of Dante's exile to Dante's views of politics to the eternal damnation of some of his opponents.

This feature require that you enable JavaScript in your browser.
END_OF_DOCUMENT_TOKEN_TO_BE_REPLACED

This feature require that you enable JavaScript in your browser.
END_OF_DOCUMENT_TOKEN_TO_BE_REPLACED