The Secret Wisdom of the Earth (Compact Disc) 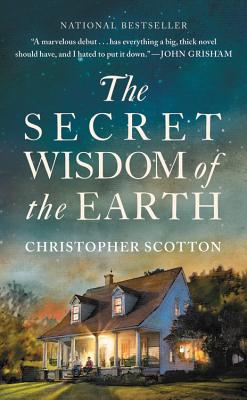 By Christopher Scotton
$40.00
Email or call for price.

“Struggling to recover from the trauma of his baby brother's tragic death, Kevin and his broken mother relocate to Medger, Kentucky, for the summer. Their return to the Appalachian coal town in which their family is deeply rooted is intended to heal them both. While Kevin's grandfather is just the person and the wild hollows surrounding their little town just the place to help him mend, Kevin finds that Medger and its citizens are in need of healing as well. Poverty, a mountaintop removal operation, and desperation are tearing their town and the land around it apart. Scotton's finely wrought characters, perfectly paced plot, and keen sense of place make The Secret Wisdom of the Earth resonate with the reader long after the book has been finished.”
— Catherine Weller, Weller Book Works, Salt Lake City, UT

A debut novel about a fourteen-year-old boy who witnesses the death of his younger brother in a horrific accident, for readers of "To Kill a Mockingbird, Peace Like a River, "and "Cold Sassy Tree"

After witnessing the death of his younger brother in a terrible home accident, fourteen-year-old Kevin and his grieving mother are sent for the summer to live with Kevin's grandfather. In this peeled-paint coal town deep in Appalachia, Kevin quickly falls in with a half-wild hollow kid named Buzzy Fink who schools him in the mysteries and magnificence of the woods. The events of this fateful summer will affect the entire town of Medgar, Kentucky.

Medgar is beset by a massive mountaintop removal operation that is blowing up the hills and backfilling the hollows. Kevin's grandfather and others in town attempt to rally the citizens against the company and its powerful owner to stop the plunder of their mountain heritage. When Buzzy witnesses the brutal murder of the opposition leader, a sequence is set in play which tests Buzzy and Kevin to their absolute limits in an epic struggle for survival in the Kentucky mountains.

Redemptive and emotionally resonant, "The Secret Wisdom of the Earth" is narrated by an adult Kevin looking back on the summer when he sloughed the coverings of a boy and took his first faltering steps as a man among a rich cast of characters and an ambitious effort to reclaim a once great community.

This feature require that you enable JavaScript in your browser.
END_OF_DOCUMENT_TOKEN_TO_BE_REPLACED

This feature require that you enable JavaScript in your browser.
END_OF_DOCUMENT_TOKEN_TO_BE_REPLACED